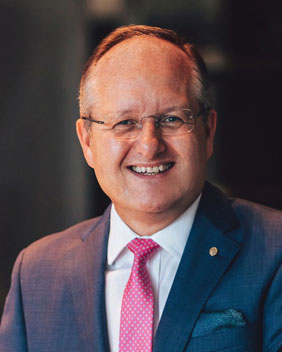 A seasoned hotelier, Alex comes to his newest role with more than 27 years of Four Seasons experience - a tenure that's spanned seven properties, three hotel openings and several industry accolades. He first visited Malaysia's vibrant capital back in 1993, while journeying on the legendary Eastern & Oriental Express. "I've had an unbreakable connection with the country ever since," he smiles, recalling the numerous Tan Sris, Puan Sris, Datos, Datins and Malaysian business partners he has worked with closely over the years.

With his eye firmly on the future, Alex will be leading Four Seasons Hotel Kuala Lumpur into its second phase of operations. "I've watched the opening of this incredible property from afar," he says, noting its exceptional run during awards season these past few years. "Now, I look forward to building further on the team's accomplishments." As he points out, the hospitality landscape is evolving rapidly now, and in unprecedented ways: "What got us to where we are today isn't going to be what gets us to where we want to be tomorrow."

In light of recent global events, the Hotel has seen a renewed focus on ensuring health and safety for guests and employees. "Looking after people is our number one priority," notes Alex, ticking off the various best practices now in effect - from stringent heart-of-the-house standards, to comprehensive employee training programs for the new normal. While face-to-face interactions may be limited, the emphasis is on staying connected with guests, using a combination of innovative tools and trademark Four Seasons thoughtfulness.

At the heart of Alex's leadership is authenticity, which comes into play in three different dimensions. First, unlocking the true essence of Kuala Lumpur through curated, in-the-know experiences, so Four Seasons guests can immerse in the destination on their own terms. Next, providing a genuine home away from home: "After a day of exciting adventures, our guests want to come back to a place of comfort and care." And finally, Alex views authenticity as a vital ingredient for high-performing teams. "When we as colleagues connect with each other meaningfully, that's when we are able to connect with our guests as well. It's about doing the right thing - rather than simply doing things right," he says, reaffirming his belief in what he calls the "decency quotient."

Alex fell hard for hotels as a young man, when his father introduced him to the manager of a property in northern England. "I got the bug right away," he says, recalling that the manager showed him around "the heart of the house, where the hotel is pumped with kitchens, finance and purchasing." It was love at first exposure: "I figured, if I'm going to work in the business, I might as well aim for the top."

He fell in love three times again: first with Four Seasons, which he joined in Hong Kong in 1993; then with his Japanese wife Satoko and their three daughters; and finally with "all of Asia" over the course of a career that has taken him to Canada, Singapore, Thailand, Seychelles and Japan. Whatever the destination, Alex is particularly keen on employee engagement as key to delivering the guest experience for which Four Seasons is so renowned. As he explains, "I like to gather with the team and exchange ideas until we agree on the Whats and the Whys - that is, what we want to see in our property and why we want to see it." Then, supported by his guidance, the team creates the How Tos for transforming theory into practice.

When he's not at work, you're likely to find Alex spending time with his family or in pursuit of the next clickable moment. With a passion for street photography and shooting in monochrome, he bought himself a Leica Q camera for a milestone birthday a few years ago. Being able to glimpse the realities of everyday life, through the lens, is priceless for someone like Alex, who draws ongoing inspiration from these words by Ralph Waldo Emerson: "To be yourself in a world that is constantly trying to make you something else is the greatest accomplishment."