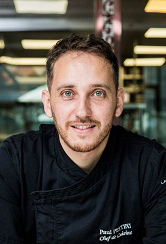 Café Cardinal has taken a new chef de cuisine under its wing with the appointment of Paul Pettini.

The French native recently joined the team after two years as head chef at Jardin Des Sens, a French restaurant by three-star Michelin chefs, Jacques and Laurent Pourcel. Prior to that he was sous chef de cuisine at Hotel Marinca & Spa by Chef MOF Jean Luc L'Hourre on the French island of Corsica.

Over the course of his career Pettini has also worked under other Meilleurs Ouvriers de France (MOF) chefs, one of the highest honors a chef can achieve in France, like MOF Frank Ferrigutti; and at Michelin-starred restaurants like La Bouitte by Chef Rene.

Café Cardinal opened just over five years ago when The Reverie Saigon made its grand debut in Ho Chi Minh City. The fine-dining French restaurant has been a popular foodie destination and Pettini will continue to build on that success.

The Leading Hotels of the World, Ltd (LHW)

The Leading Hotels of the World, Ltd. is the prestigious luxury marketing organization representing 400 of the world's finest hotels. Headquartered in New York City, the company maintains a network of 18 regional offices in key cities around the world.
more information
Recent Appointments at LHW

11 June 2021 — Ms. Alba has spent 15 years developing customer-centric marketing campaigns and communication strategies for global businesses. This highly skilled marketer started at Leading Hotels in 2014, first as the Director of Global Public Relations and Media Partnerships, and then as Senior Director of Marketing Communications.
read more

11 June 2021 — Mr. Koserowski brings nearly 25 years of experience in marketing to his new appointment as Senior Vice President and Chief Marketing Officer. He was appointed Vice President Digital Product Development and Marketing for the organization in 2011 and upon Ms.
read more