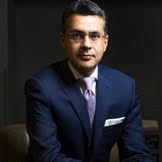 Walia will step into the role on July 1, 2021, following the retirement of current COO, Guido De Wilde, announced last month. Briet will take on the role from Carlton Ervin, who was recently appointed as Marriott's Global Development Officer, International.

Walia, will be responsible for Marriott International's 146 operating hotels across the Middle East, as well as Egypt and Turkey, representing 21 hotel brands across ten countries, while Briet will be responsible for driving Marriott's growth trajectory and market position across EMEA, while supporting the company's global-wide development vision.

In his new position, Walia will work to drive the company's recovery across the Middle East and grow its presence across the region, while supporting the company's vision to become EMEA's favourite travel company.

6 May 2021 — Luminary Hotel & Co. is pleased to announce the promotion of Brent Gauthier to the position of Executive Chef for all food and beverage operations and outlets at the hotel, including The Silver King Ocean Brasserie, Ella Mae's Diner, Beacon Social Drinkery and Oxbow Bar & Grill.
read more

5 May 2021 — The Palace Hotel, a Luxury Collection Hotel in San Francisco, appointed Lilian Tolliver as Chief Engineer of the 556 room historic property. The Palace is very proud of Lilian as she accepts the position as the hotel's first female Chief Engineer and continues to make history at the iconic landmark.
read more