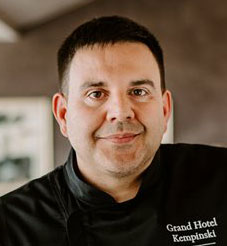 Grand Hotel Kempinski Riga welcomes Javier Lopez as its new Executive Chef, overseeing the hotel's culinary experience, including the rooftop bar and restaurant Stage 22, Amber Restaurant, the Lobby Lounge, the Grand Bar, In-room Dining, and Catering and Banqueting for special events. Born in Barcelona, Midland Spain, Javier has found that his passion for cooking comes from his family.

By the age of 18, he knew what he wanted to do, and, following a culinary arts degree in Barcelona, the first 10 years of his career, Javier was more focused on learning how to became a Chef by perfecting culinary techniques and holding positions with renowned Chefs from Michelin stars Restaurants, such as Sea Grill in Brussels and with Gert Jan Raven from Antwerp. After that he landed back home as an Executive Chef at Fira de Barcelona. His career took him to different corners of the world and in 2008, he had his first experience with the Baltic States as Executive Chef at Grand Hotel Kempinski Vilnius in Cathedral Square, Lithuania. From 2018, Javier was getting his experience in South East Asia as Cluster Ex Chef at Belmond La Résidence d'Angkor & Belmond La Residence Phou Vao. Javier is no stranger to Riga, having worked for three years in the Latvian capital from 2008 to 2011 and also assisted in the pre-opening of Grand Hotel Kempinski Riga in 2017.

With a natural flair for culinary arts coupled with his passionate Mediterranean spirit, Javier will be a key addition to the hotel's continued success in Food and Beverage. Javier's culinary philosophy consists of using natural ingredients, focusing very much on quality, organic vegetables or a so-called farm-to-table approach. He stands for sustainability and ensures environmental protection and preservation. He also supports minimum waste values, and adopts a harmonious, sensitive approach to the environment and cultural surroundings. A Spanish national, Javier speaks fluent English, Russian and French, in addition to his mother tongue.

29 September 2021 — Adil Ahmed has been promoted to director of sales at Kempinski Hotel Muscat. He had been sales manager since 2017. For the past four years, the Omani has spearheaded the hotel's leisure segment, helping to establish the hotel as one of the Sultanate's leading leisure destinations.
read more
More from Kempinski
Map
Advertisements
Never miss a story again
Sign up for the HN360 daily newsletter
Media Kit – Submit Content
Advertisement
Advertisements