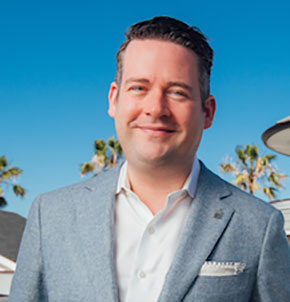 Southern California's effortless coastal destination in the heart of Newport Beach, Lido House, an Autograph Collection hotel, is pleased to announce the appointment of André Brose to the role of General Manager at the 130-room, nautical-inspired beach house.

With nearly 20 years o f hospitality experience, Brose brings a well-versed background and rich expertise to the luxury, Cape-cod infused hotel. As the General Manager of Lido House, Brose is responsible for overseeing the day-to-day management of the hotel's operations and upholding the highest standards of guest service. He is tasked with supervising project development, employee engagement, guest satisfaction, company culture, and also brings innovative strategies to the table with the goal to provide elevated experiences to the next generation of travelers.

Originally from Germany, Brose relocated to the United States in 2016 and has built an impressive repertoire with key leadership roles in the industry. Prior to joining the Lido House team, Brose served as Hotel Manager for The West Hollywood EDITION in Los Angeles, where he led his team through the unprecedented times of COVID-19. Before making the move to Southern California, Brose had roots in San Francisco as the Hotel Manag er of The St. Regis San Francisco, where he helped regain the hotel's coveted 5-star Forbes status. Brose held multi-faceted positions throughout his career, including being an Executive Assistant Manager at The Sheraton Grand Hotel & Spa Edinburgh in the United Kingdom and various roles during his tenure at Le Méridien Hamburg in Germany.

Brose received his Master of Business Administration in Tourism and Hospitality from Edinburgh Napier University and also earned certifications from Cornell University in hotel revenue and hospitality management. He was awarded two 'President's Awards' for his notable achievements with Starwood Hotels & Resorts prior to joining Marriott International. When not in the office, Brose can be found exploring his new city of Newport Beach.

25 October 2021 — Le Meridien Jakarta is happy to announce the promotion of Desmond Carneiro to Director of Food And Beverage. Desmond has been working at Le Meridien for the past 4 years as Executive Chef and most recently Director of Culinary.
read more

21 October 2021 — The JW Marriott San Antonio Hill Country Resort & Spa is pleased to announce Kip Reuman has accepted the position of Destination Sales Executive which completes the resort's sales team.Kip Reuman previously served in the role of the resort's Director of R oom Operations and looks forward to shifting his focus to group sales.
read more