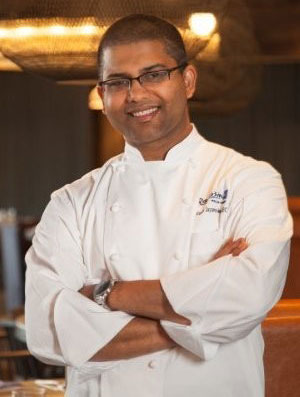 In Jayawardena's new role, he oversees culinary operations at three regional properties under the Radisson brand, including Radisson Blu Mall of America, Radisson Blu Downtown Minneapolis, and Radisson RED Minneapolis. This includes all food and beverage for meetings, events, and room service, as well as branding and menu development for FireLake's two Minnesota locations.

Jayawardena has nearly three decades of experience in the restaurant and hospitality industry. Originally from Sri Lanka, he took a life-changing journey in 2001 as the first culinary consultant to travel to the U.S. from his home country. At the time, Jayawardena worked for a private Minneapolis restaurant in the Uptown food district. He briefly returned to Sri Lanka to sharpen his skills at the iconic colonial Mount Lavinia Hotel under Master Chef Publis Silva before traveling back to Minnesota. Jayawardena worked his way through the culinary discipline holding various positions including overnight baker, line cook, pastry chef, sous chef, banquet chef, and executive sous chef. In 2012, he became the Club Chef for the exclusive Legends Club of Target Field, home of the Minnesota Twins, and the stadium's other two premium restaurants. Jayawardena joined the pre-opening team for Radisson Blu Mall of America's FireLake Grill House & Cocktail Bar in 2013 where he worked as executive sous chef. He quickly moved up the ladder and was promoted to lead the hotel's culinary team as executive chef in 2015.

When he's not developing new recipes, Jayawardena enjoys mentoring young culinary professionals and sharing the principles he learned at the onset of his career. His experience growing up in Sri Lanka continues to influence Jayawardena, and he enjoys sharing this knowledge with his hospitality community.

6 December 2021 — Radisson Blu Aqua Hotel proudly announces the appointment of Kevin Kelly to Director of Sales and Marketing at the Chicago hotel, the first in North America. A Midwest native and marketing and sales expert, Kelly brings over thirty years of experience in the hospitality industry to Radisson Blu Aqua Hotel.
read more

25 October 2021 — Radisson Blu Hotel & Spa, Nashik announces the appointment of Biswa Ranjan Mohapatra as Director of Rooms. A seasoned hospitality professional with over 15 years of experience, Biswa brings a wealth of knowledge and skills of the housekeeping and front office functions to his current role.
read more