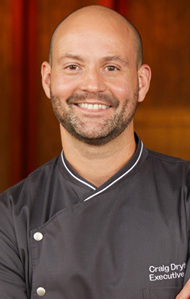 Four Seasons Hotel Denver announces that Executive Chef Craig Dryhurst will be leading the talented culinary team of EDGE Restaurant and EDGE Bar. Chef Dryhurst brings a wealth of experience, innovation and natural energy to the exceptionally well recognised steakhouse and bar located in the heart of downtown Denver.

Born in Edmonton, London, UK, Dryhurst grew up in a small town called Stevenage. As a child, he worked alongside his father who was a keen gardener growing vegetables and assorted berries. Visits to family in Northern Ireland also cemented his appreciation for recreating locally-flavoured dishes and globally-inspired food.

Dryhurst has had a long culinary career, starting with his work in a series of celebrated London hotels including The Langham, Claridges, The Lanesborough and The Goring. On the French Riviera, he practiced his craft at the famed Grand-Hôtel du Cap-Ferrat (now a Four Seasons hotel). In 2002, he joined Four Seasons Hotel Boston as Chef de Partie, and spent time in its restaurants and banquet operation. He then worked at Four Seasons Hotel Vancouver, where he re-branded its restaurant, YEW, as a sustainable seafood concept alongside Chef Ned Bell, before transferring to Hawaii.