President and CEO at Marriott International 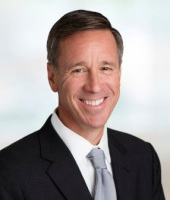 Arne M. Sorenson is President and Chief Executive Officer of Marriott International, Inc., the largest lodging company in the world. Following Marriott’s September 2016 acquisition of Starwood Hotels and Resorts, the company includes more than 5,700 properties across 30 brands in more than 110 countries. In fiscal year 2015, Marriott reported revenues of more than $14 billion.

Mr. Sorenson joined Marriott in 1996. He became the third CEO in the company’s history in 2012 – and the first without the Marriott surname. Prior to that, he served as Marriott’s President and Chief Operating Officer. He has held a number of positions, including Executive Vice President, Chief Financial Officer and President of Continental European Lodging. He was elected to Marriott’s Board of Directors in 2011.

Marriott’s Global Sustainability Council was co-founded by Mr. Sorenson in 2007. The following year, he launched Marriott’s rainforest preservation partnership with the Amazonas Sustainable Foundation in Brazil.

Mr. Sorenson chairs Marriott’s Global Diversity and Inclusion Council. The Council, along with the Marriott Board of Directors’ Committee for Excellence, monitors and evaluates Marriott’s strategy to promote a diverse workforce, as well as ownership, customer and vendor communities around the world.

Before he joined Marriott, Mr. Sorenson was a partner with the law firm Latham & Watkins in Washington, D.C. He is a graduate of Luther College in Decorah, Iowa and the University of Minnesota Law School.

He and his wife Ruth live in the Washington, D.C. area, where they raised their four children.

An open letter to President-elect Trump

Congratulations on your election as President of the United States. You ran an impressive campaign, never doubting your message. You now have the opportunity to lead from the White House and all of us want you, and the nation you will serve, to be successful.
Opinion15 Nov 2016
Organization Details