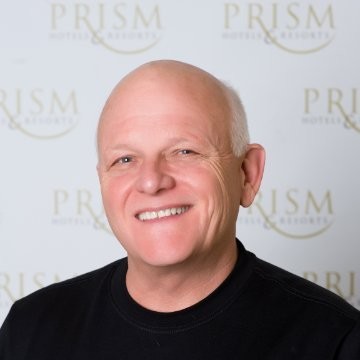 Steve Van, president and CEO of Prism Hotels & Resorts, founded the Dallas-based company in 1983. Under his leadership, Prism has become an award-winning full-service hotel management, investment and advisory services company. A prominent speaker and sought-after expert in the hospitality industry, Steve was recognized by Hotel Business Magazine as one of the trade’s “People of 2012.” In the past few years Steve has focused his teams’ efforts on going from Good to Great with the primary focus on operational excellence. Prism remains one of the most experienced managers of hotels and resorts nationally and has managed brands that include Marriott, Hilton, Doubletree, Sheraton, Embassy Suites, Holiday Inn, Preferred Hotel Group, Radisson, and numerous independents. Since the company was founded, Prism has managed over 300 hotels across the nation. Steve’s foray into hotels began as an Executive Vice President of Criswell Development Company. While there he developed the Hyatt Re­gency Austin, Hyatt Regency Denver Tech Center and the Hyatt West Houston. His first independent purchase was The Melrose Hotel in Dallas, which his Prism team turned into the first Omni franchise. Steve currently serves on a number of industry boards including the Hilton Doubletree Hotel Owner’s Advisory Council and served on the Starwood Hotels Owner’s Advisory Council for creation of Aloft Hotels. Steve earned his bachelor’s degree from The University of Texas and also attended The University of Texas Law School and was admitted to the State Bar of Texas. He has served as the Assistant Attorney General of Texas and as a Director of the Texas Turnpike Authority. Since 2008 he has been a Founding Director of AHMSA, a nonprofit based in Bogota, Columbia, to teach internal refugees entrepreneurial skills to lift their families out of poverty. AHMSA is now supported by the Bill and Melinda Gates Foundation along with the United Nations. Steve was also the youngest Director of NATO’s US Arm, the Atlantic Treaty Assembly. Steve is also the co-founder of the Texas Lyceum Association.

Industry experts have been wondering when the industry bubble is going to burst. Well, the reality is, the long anticipated net operating income recession is nigh upon us.
Opinion30 Nov 2018
Organization Details