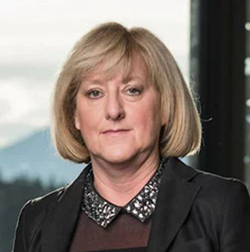 Swiss and British national, Julia Aymonier, upon graduating from Glasgow University and the Polytechnical University in Wales with a Bsc (Hons) in Computer Science, specialized in IT for the banking, finance and trading industries working for companies such as JP Morgan (Suisse) SA, La Compagnie Benjamin de Rothschild SA, Banque Bordier et Cie and Union Bancaire Privée, amongst others. Her career has led to her working in various countries in Europe but also in the USA. After more than 25 years in these industries, Julia Aymonier chose to change direction and bring her wealth of experience in IT to the Hospice Général, responsible for social welfare and immigration in the canton of Geneva: “I wanted to use my experience to help the Hospice Général help others.” Joining Ecole hotelière de Lausanne in June 2015, she became member of the Executive Committee and was named CIO in February 2016. In 2019 Mrs Aymonier took on the role of Chief Digital Officer for EHL Group.

Developing Hybrid Skills: How Tech and AI are Reshaping the Hospitality Job Market

Change has never been as rapid as today. The constant evolution in technology, at an ever-increasing pace, is changing our world and our working environment as never before. The impact of technology is reshaping occupations and new job categories are beginning to appear on the market requiring "hybrid" skills.
Opinion 4 Jul 2019
Organization Details