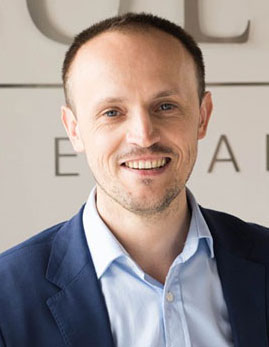 Lukasz joined Cult Wines following a career spanning more than a decade in the hospitality industry. Whilst studying wine in Poland, Lukasz took the decision to pursue his career in one of the world's best restaurants, The Fat Duck in Bray, England. Following 7 successful years at The Fat Duck, where Lukasz honed his skills as a sommelier he joined Michelin starred restaurant Pollen Street Social as Head Sommelier, where he oversaw a wine list of 800 bins and a team of 7 sommeliers. This gave Lukasz the opportunity to cement his reputation as one of the finest sommeliers in the UK, his success in national competition coupled with earning his Court of Master Sommeliers Advanced certificate is testament to this. Lukasz’s role will see him oversee a number of key activities, including working closely with producers, arranging tastings, events, dinners and hosting masterclass events. He will also be using his contacts and knowledge base to further develop our on-trade sales, sourcing unique parcels of wines to develop and expand our retail sales offering. Lukasz will also be on hand to provide expert consultancy services to our growing worldwide client base. He will work with customers to help advise and build home wine cellars, evaluate and appraise existing collections. During his time in the restaurant industry, Lukasz has had the opportunity to taste an enviable back catalogue of the world’s greatest wines and will be sharing his personal tasting notes, reviews and recommendations on our blog throughout the course of the year.

What Can You Tell From A Wine Label? An Expert Explains

They say you can't judge a book by its cover, but does the same apply to a wine label? Wine labels have a lot of information on them. Some of it is critical to understanding what is in the bottle, and some of it is nothing more than a swirling font and prestigious-looking logo.
Opinion 9 Apr 2021

Perfect Wine Pairings for Valentine’s Day, according to an expert

Due to the Coronavirus pandemic, many of us are spending Valentine's Day at home this year. However, whether you are celebrating in person or virtually, an indoor dinner and a special bottle of wine can make the day memorable.
Opinion12 Feb 2021

How To Master The Skill Of Pouring Wine, According To An Expert

We all know how to pour a glass of wine, right? Wrong. Depending on how you pour your wine, you can actually enrich the taste of it. You don't need to perform silver service in your own home (unless you want to, of course), but drawing upon sommelier know-how will improve the taste and develop your confidence when you are next surrounded by guests.
Opinion16 Nov 2020

For both casual and avid wine drinkers alike, tasting notes are an important barometer in gauging how likely one is to enjoy that particular wine. While the memory of tasting wines may last for several days, when you frequently taste many wines in a short period of time, they can be hard to accurately remember down to the last detail.
Opinion18 Sep 2020

5 perfect picnic wines, according to a wine expert

Heatwave conditions, where temperatures have exceeded 30 degrees, are set to continue in parts of southern and central England. The picnic is a great British institution, and it's likely to be more popular than ever as people turn their attention to safer socialising outdoors.
Opinion21 Aug 2020
Load More
Organization Details