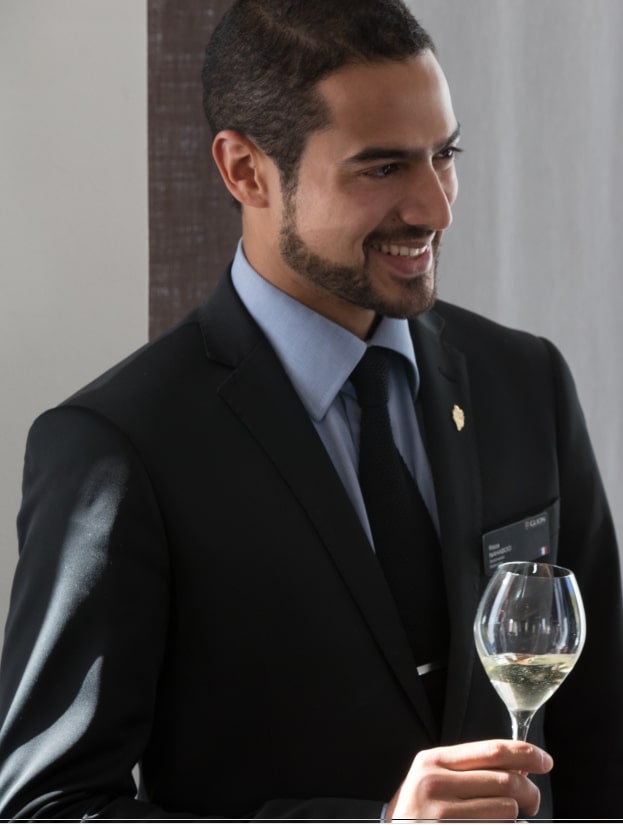 Réza Nahaboo is an award-winning sommelier with over 10 years of experience at renowned restaurants and luxury hotels in Switzerland. Originally from Mauritius and Réunion, he began his career at the age of 20 as Sommelier at L’Ermitage by Etienne Krebs. In 2008, Réza became Assistant Chef Sommelier at the Restaurant de l’Hôtel de Ville in Crissier, a three-star Michelin restaurant widely considered among the world’s best. From 2010 to 2014, Réza’s career took him to some of the finest luxury hotels in Switzerland. He served as Chef Sommelier at the historic Grand Hôtel Suisse Majestic in Montreux, Assistant Chef Sommelier and Manager at Il Lago, Four Seasons Hotel des Bergues Geneva, and Maître d’hôtel at Hostellerie du Pas de l’Ours, a five-star mountain chalet in Crans-Montana. More recently, Réza was Chef Sommelier and Assistant Manager at Hôtel Royal Savoy Lausanne, where he created a list of 420 wines as part of the hotel’s reopening in 2015. In 2016, Réza won first place in the Best Sommelier of Switzerland competition. He has received a number of other awards and distinctions, including Best Swiss Wine List 2017 in the “traditional” category, awarded by Vinum for the wine list at Hôtel Royal Savoy. Réza joined Glion Institute of Higher Education as Sommelier and Practical Arts Instructor in 2017. He is certified by the Court of Master Sommeliers and holds a Mention Complémentaire Sommellerie from IMT Grenoble.
Organization Details
Insights by Réza Nahaboo (1)

Since the beginning of the spread of the virus, all industries worldwide have been heavily affected. It has consequently left its impact on the wine market which has started to deteriorate at the announcement of the cancellation of some major local, national or international events.
Opinion15 Apr 2020
Organization Details