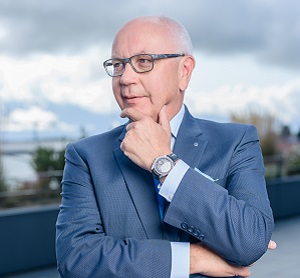 Michel has always made it a watchword to bring his different passions into his professional life as much as possible. Today they can be summed up in part by his fervor for the Swiss dual education model, gastronomy and tourism. In 2014, Bilan magazine ranks Michel among the 100 most influential Swiss personalities. Later in the year, he receive the Hospitality Innovation Award for his commitment to innovation in hospitality education. Boldness and the quest for innovation must punctuate our daily lives because they are what allows our industry to constantly renew itself, encourage progress and deal with disruptions. In 2015, Michel is appointed CEO of the EHL Group. A position that allows him to spread the Swiss model of dual education throughout the world and according to values that are dear to Michel: excellence, family, respect, learning and innovation. Since 2019, he also holds the position of President of the Office des Vins Vaudois, a state entity dedicated to the promotion of local Swiss products, a reflection of a very rich terroir to which he is closely attached. Today, Michel is Chairman of the Board of Directors of the EHL Haute Ecole, EHL Advisory Services, EHL Singapore Ltd and the Swiss School of Tourism and Hospitality. He is also a member of the Board of Directors of the Leysin American School, of the Swiss Tourism Council and of the "Swiss Week of Taste" Foundation.

Loyal to my Jura origins, I often compare the world of education to the complex mechanism of a Swiss watch. Indeed, precision and technique are necessary components for creating high-quality watches, but they are nothing without the complement of soul, a history and strong values.
Opinion28 May

For over a year now we have been practicing social distancing. For most industries, the pandemic has caused dramatic change in the daily life of employees and leaders – and the same goes for students and teachers around the world.
Opinion23 April

“Lifelong Learning”: Why Dual Education Institutions Will Lead The Way

By 2022 - in just one year - more than 40% of core skills required to perform existing jobs are expected to change, as estimated by the World Economic Forum in their recent call for a "global reskilling revolution".
Opinion 9 February
Organization Details