ANZPHIC answers: Who's on top Down Under? 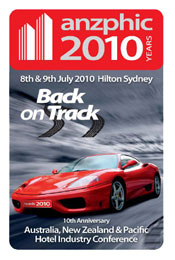 As delegates sought some good news in Sydney 2 and 3 July, panelists at the Australia, New Zealand & Pacific Hotel Investment Conference did their best to deliver during: “Who Wins, Who Loses in the Flight to Value?” moderated by hotel consultant Simon Barlow.

Australia-wide data from STR Global through May shows the country is doing better than Europe, the U.S. and parts of Asia, according to Barlow.

Specifically, the market is down 9 percent YTD in revenue per available room across each hotel category. The occupancy decline in three- and four-star hotels is more than in five-star hotels across Sydney, while a decline in rates for the same period is in the range of 2 percent to 5 percent. RevPAR is down 10 percent in the past 12 months. YTD ’09 is getting worse as rates fall faster than occupancy, Barlow said, and year-to-date RevPAR in three-star hotels is the worst performer. There’s room for improvement in Sydney, especially the midmarket sector, he said.

Melbourne fared somewhat better than big sister Sydney, with occupancy decline greater in the five-star genre than in midmarket. Barlow said. Rate growth is seen in all categories over 12 months, with the event business there helping five-star hold rates despite declining occupancy and increased supply. Five-star average rates are higher than in Sydney.

Brisbane is somewhere between Sydney and Melbourne, with Perth the star performer overall, Barlow said.

So what’s Melbourne doing better? Poynder thinks the artsy city is more confident and believes in itself and the product.

“Sydney is 10 years behind Melbourne and can’t compete with its sporting or one-off events,” she said. “It’s up to us as operators to get hold of data and start to perform as a market as Melbourne does.”

Poynder also noted that location plays a role in the Sydney-Melbourne sibling rivalry.

“Most of our three and four-star hotels are in the city’s fringe versus being in the (central business district) as they are in Melbourne,” she said.

Poynder addressed concerns about the loss of the corporate market at the five-star level.

“They’re still having day meetings,” she said. “I don’t think that market is coming back for some time. In the five-star market, we’ve lost contact and don’t know how to deal with association business as well as we used to. It doesn’t mean we have to cut prices, but we have to push our value-added and our attention to detail.”

Keep your ear to the ground

It’s just not cool to be ostentatious now. But as companies eschew hotels for conferences, hotels at the high levels “can still be very discreet, with not a lot of signage in hotel lobbies these days,” Poynder said.

She said that Down Under, government, manufacturing and retailing are quite strong and are fodder for quality conferences if traditional corporate business is not.

So what can three-, four- and five-star hotels do better to get more corporate business? Be “straight up.”

“Hotels quote a rate and then we see it on other sites, cheaper,” he said. “Also, be flexible, for we don’t want to guarantee 100 rooms for four nights just to get use of the ballroom.”

He recommends “getting on with associations and those government conferences” that still hold meetings.

“It’s a training issue, when what’s needed is a strategy everyone understands,” she said. “Sales incentives need to be based on profits rather than revenues. And we must train salespeople, not simply find them.”

A sales force whose first reaction is to drop rates isn’t doing you any favors, Gordon said.

“We get someone that green on the other end of the phone—they’re costing you money every minute,” Gordon said. “We’ve been around!”

“Too many people are spending too much time looking behind,” Ronfeldt said. “Have courage and discipline to price according to demand.”

“For the last three years, we were spoiled here in Australia with nearly every hotel running in the high ’80s, turning down wholesalers’ business,” Wan said. “We need to train to change the mentality of approaching the entire business model and consider dynamic pricing.”

He, too, acknowledged the transparency of rates, particularly on third-party Web sites.

“Every hotel sees what competitors are doing in real time,” he said.

Poynder admitted that technology has changed the game.

“We used to give fantastic deals to contracted business and used to rip off the rack rate client; the reverse is happening now,” she said. “The Internet has changed the whole philosophy. People aren’t looking far enough ahead at the consequences.”

“International companies may make a decision that doesn’t suit the marketplace,” he said. “Winners are those that stay very close to the customers and really understand their needs.”