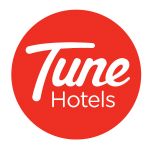 The hotel is also a short walk to the Asoke BTS Skytrain station and Sukhumvit MRT underground train network, which provides easy access to all key shopping, financial and entertainment areas and attractions in Bangkok.

The Tune Hotel Asoke, Bangkok will be the first of many more in Thailand's capital and is the third in the country after Hat Yai and Pattaya. The popular resort island of Phuket will also welcome its first Tune hotel in December when a 150-room property opens in the entertainment precinct along Patong Beach.

Red Planet Hotel's Chief Executive Officer, Tim Hansing, said it was a milestone accomplishment for the company to bring the global chain to Bangkok and increase the Tune portfolio once again in Thailand.

"Red Planet Hotels just opened the very first Tune hotel in Indonesia's capital Jakarta in July and to have the first in another capital city in Bangkok just weeks later is quite an achievement for the Red Planet team," Mr Hansing said.

"This hotel is the first of more in Bangkok as our customers have been asking us to bring the concept to Bangkok since our first hotels in Hat Yai and Pattaya opened.

"We are on the verge of signing up to four or five more sites in Bangkok as we expand the brand through a capital city receiving more and more leisure and corporate travellers each year."

Through a "significant" recent investment to acquire a 16.05% stake in the Tune brand, Red Planet is now the third largest shareholder in Tune Hotels with ownership interests in 17 hotels located across Thailand, the Philippines, Indonesia, Malaysia and the United Kingdom as of today. Red Planet also has a funded pipeline for 20 hotels currently under construction.

Mr Hansing added 2012 was a "milestone" year in Red Planet's development. "It has been quite busy!" he said. "By December, Red Planet Hotels will have achieved gaining ownership interests in 20 operating hotels in just 12 months.

"With our owned and operated assets alongside the existing Tune portfolio we have invested in, our expansion into this sector during 2012 sets us up to grow further next year and maintain our strategy of sustained development and investment in one of the world's growing brands."

Red Planet Hotels, founded in 2010, is a privately-owned regional hotel group focused on Asia's expanding budget hotel sector. The company owns and operates 30 hotels in Indonesia (7), Japan (5), the Philippines (13), and Thailand (5) for a total of 4,783 rooms. Eight additional hotels, comprising 1,769 rooms, will open across Japan, Thailand, and the Philippines in 2019 and 2020. These hotels will open using Red Planet's robust and scalable technology platform, providing both advanced reservation software, ensuring a fast and efficient booking process, and local attraction guides for customers. Red Planet comprises a stylish budget hotel offering, with all its properties centrally located and equipped with high-speed Wi-Fi. Red Planet's companies based in Jakarta (Red Planet Indonesia - PSKT:IJ) and Tokyo (Red Planet Japan - 3350:JP) are listed on the Indonesian and Japanese stock exchanges, respectively. For more information, please visit: www.redplanethotels.com