Jean Pierre Simon - A Hotelier’s Story of the UAE 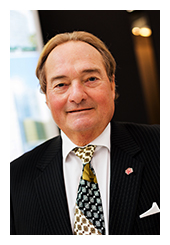 As the UAE gears up to celebrate its 43rd National Day on December 2, one of the biggest changes that the country has seen is in the hospitality industry. It has grown at an incredible pace. We speak to Jean Pierre Simon, Regional General Manager, Northern Emirates, Coral Hotels & Resorts, an Emirati group with a strong regional footprint, about his experience in the emirates and what holds him here

Swiss Hotelier Jean Pierre Simon, Regional General Manager, Northern Emirates, Coral Hotels & Resorts, has over 45 years of experience in the industry working with leading brands like Hilton, InterContinental and Sheraton Hotels worldwide. He first came to the United Arab Emirates in 1994. Since then he left its shores many times only to return back. And the last time he came, he decided to stay on.

He recalls, "I came to Dubai to open Royal Abjar Hotel in 1994 as Executive Assistant Manager and in-charge of F&B. During my time there, besides starting popular restaurants such as Flying Dragons, I opened Harry's Bar, one of Dubai's very first Jazz bars where we brought leading bands like Ronnie Scott from London. Our outlets did exceedingly well. Competition at the time was not much. All we had those days in terms of luxury hotels was Chicago Beach Hotel which later became Jumeirah Beach Hotel, Hyatt Regency, Hilton World Trade Center and Al Habtoor Metropolitan Hotel. Forte Grand in Jumeirah Beach was under construction".

A year later, Jean Pierre left Dubai to work in Bahrain from where he moved to Jordan. It was not until1998 that he once again decided to return to the emirates – this time to join the Jebel Ali Hotel & Golf Resort as Director of Food and Beverage. He says, "I was missing something and that is when I got a call from Jebel Ali Hotels & Golf Resort saying that the General Manager Mohamed Al Geziry wanted to see me. I came down for the interview that was quite successful. And so, I was hired as Director of Food and Beverage to look after 20 different outlets as well as a massive banqueting operation including outside catering for up to 5000 people. Mr Geziry is the man who helped to bring the European market to Dubai especially the Swiss and German tourists".

Jean Pierre continues, "I stayed at the Jebel Ali Hotel & Golf Resort for three years and during the time I had the honour to do some of the most prestigious functions for the government and many mega events such as the Dubai Airshow, Dubai World Cup, Dubai Desert Classic, Nad Al Sheba Camel and Horse Races, etc where very often we had the seven rulers of the seven emirates attending".

In 2001 Jean Pierre took the post of General Manager at Al Jazira Hotel & Resort in Ghantoot, Abu Dhabi. He remembers, "The reason I went there was because they wanted to build a totally new concept opening a new hotel complex with villas and golf club. Unfortunately the project never took off and after one and a half years I left".

This time Jean Pierre took off for Mauritius from where he travelled to Kenya and South Africa. He says, "In the summer of 2008, I got a call from the then Managing Director of HMH – Hospitality Management Holdings Michel Noblet (now President) asking me to take the next flight to Dubai saying he needed me to join this fabulous home-grown chain of hotels that was the first in the region to develop an alcohol-free concept. It sounded very exciting so I accepted. I arrived in Sharjah on 15th April, 2008 to join Coral Beach Resort Sharjah and never left."

Jean Pierre looks back over the last two decades with a great deal of amazement. "Sheikh Zayed was only World Trade Center and after the Metropolitan Hotel there was just sand until Jebel Ali Hotel. It was a whole day affair to travel there. When I first came to the UAE, I used to hear all those big plans one after the other and say to myself, 'No it will not happen. But everything that was announced was done. Once when my family visited, we saw those unbelievable design boards for Palm Island and few yeas later it was finished."

He continues, "Likewise Burj Al Arab is the Eiffel Tower of Dubai. His Highness Sheikh Mohammed bin Rashid Al Maktoum, UAE Vice President and Prime Minister, had fantastic vision to make it the trademark of Dubai and then everything followed. The largest mall, the tallest tower, the first metro… And all this in only a few years! What I am impressed most about Dubai is how fast they started to create world events to put Dubai on the world map. And the very first events that put Dubai on the map were Men's Dubai Tennis Championship, Dubai Golf Desert Classic and Dubai World Cup. In the beginning I did not understand why these three mega events were scheduled one after the other and the rest of the year a bit quiet. But whoever made the decision was absolutely right. For those two months the world only talks about Dubai.

"Today, of course, we have plenty more events like the Jazz Festival, the different races, marathons, cycling, concerts, cultural shows, exhibitions and more. Dubai has done a fantastic job of promoting the UAE that most other nations could not do. It is truly fascinating and one can only admire Dubai Department of Tourism and Commerce for having put Dubai so quickly on the world map. I wish everybody a very happy National Day."

The Coral Beach Resort Sharjah features 156 spacious rooms, many with panoramic sea-view. A major attraction is the wide repertoire of dining options with menus to cater to every taste. The resort is located on one of the emirate's principal sand beaches and features a range of leisure activities for all ages, including the Rimal Club, state-of-the-art fitness centre, children's pool, indoor playroom and complimentary Kid's Club as well as tennis (By Clark Francis Tennis Academy), badminton, volleyball and two outdoor swimming pools. For more information about the hotel, visit hmhhotelgroup.com/coralbeachresortsharjah

Coral Hotels & Resorts is a quality-driven 4 & 5-star brand with a vision of excellence. Headquartered in Dubai, the chain offers an array of exciting properties designed for discerning travellers who seek intimate surroundings, distinctive service and safe environment across key destinations in the Middle East and Africa.
brand information
Other Brands operated by HMH

Founded in 2003 in Dubai, HMH – Hospitality Management Holdings is a fully-integrated hotel management

company that prides itself on being the first hotel chain in the Middle East to offer halal-friendly, alcohol-free safe environment. It provides hotel owners and developers a broad spectrum of comprehensive management solutions with five distinct, yet complementary, hotel brands catering to varied market segments from budget to luxury. These include The Ajman Palace Hotel, Coral Hotels & Resorts, Corp Hotels, EWA Hotel Apartments and ECOS Hotels. Through its dynamic operation and strategic expansion in the Middle East and North Africa, HMH has been successful in unlocking a world of opportunities while creating value for its stakeholders, associates, staff members and customers. Its existing portfolio features superb properties located in some of the most desirable destinations across the MENA region, as well as a healthy pipeline of hotels under development. For more information about HMH please visit http://www.hmhhotelgroup.com
More from HMH
Most Read
Advertisements
Never miss a story again
Sign up for the HN360 daily newsletter
Media Kit – Submit Content
Latest News
Advertisement
Advertisements