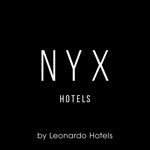 BERLIN/MILAN -- Finally we have our debut: The NYX Milan is the first lifestyle hotel from the House of Leonardo that has opened its doors. Travelers and guests of all shades will have access to 299 rooms and five different F&B venues. In addition to a spacious patio, the roof-top terrace on the 12th floor invites guests to drink in the fashion metropolis, with a breath-taking view of the city. The Leonardo Hotel Group invested more than 10 million Euro in the remodeling of the first European NYX Hotel.

Milan stands for experimentation, the embodiment of style and cutting edge trendiness. This unique style mix is reflected in the "NYX Art" concept; designed by leading Street Artists, who are creating the look and feel with authentic Italian flair. Among the creatives and artists who have decorated the hotel for posterity, are the very well-known Italian "EAD Crew", home to artists such as Joys, Peeta, Orion and mades514. Their signature graffiti art in a three-dimensional style is evident on many of the walls. This not only attracts the gaze of the NYX Milan guests, but is also poised to become a magnet for tourists and locals alike, who are on the look-out for trendy city hot-spots.

Hotel Interior Designer Andreas Neudahm has also contributed to capturing a special atmosphere with the interior design of the hotel, creating a venue where one can pursue one's individuality and lifestyle in a relaxed space. The furniture brand B&B Italia, known for its high-quality designer products, was an exclusive partner, lending its 'Made in Italy' stamp to the hotel. Much of the furniture was specially made for NYX Milan, among them some bespoke accent pieces. A further focal point in the hotel rooms, are the previously unreleased original prints by fashion photographer Helmut Newton, which adorn the head-boards of the beds with large-format images of the Italian movie stars Gina Lollobrigida and Claudia Cardinale. The expansive lobby with integrated bar and a large outdoor area offers a trendy and chic setting for events, corporate events and club-nights, along with the hip restaurant "Clash", which serve up delicious culinary delights.

NYX Milan provides a space where travelers and guests can express their individual lifestyles, thus creating a colorful and dynamic setting, which captures the Zeitgeist: "NYX Hotels embodies a trendy non-conformism". "We are happy that we can present a creative cocktail of art, music and design, a pulsating world of ideas, to our guests. And, never in the same way twice", says Linda Mariotti, Hotel Manager of NYX Milan.

LEONARDO HOTELS is the European division of Fattal Hotels Group, founded by David Fattal in Israel. The Leonardo Hotels are present in Israel and Europe with over 115 hotels in more than 50 destinations. With more than 75 hotels in more than 40 destinations Leonardo Hotels is active on the European market since 2006, established in the 3-4 star superior category as well as equal level. Currently spanning Germany, Austria, Switzerland, Belgium, the Netherlands, England, Scotland, Spain, Czech Republic, Poland, Hungary as well as Italy, the hotel group with its 13,000+ rooms and over 22,000 m² of conference space offers places of well-being, that are characterised by their own regional character, local flair and their own design identity, addressing all individual needs. All according to the company"s credo of »feeling good«, providing 100% guest satisfaction. The company management for Europe is based in Berlin. The Leonardo Hotels umbrella brand is complemented by the »Leonardo Hotels«, »Leonardo Royal Hotels«, »Leonardo Boutique Hotels« and »NYX Hotels« brands.