Executives from HSMAI organisational members are offered a unique opportunity to share trends and predictions that will guide the priorities for the content and educational programmes that will be introduced by the association through a uniquely facilitated Curate – an HSMAI Executive Insights Forum event that will be held twice a year. It is a singular opportunity to connect with contemporaries around emerging issues and growing trends – resulting in invaluable insights that can help them and their companies lead through the most critical business concerns that the industry is and will be dealing with.

The first Curate will take place in Amsterdam on 11 April (The day after ROC & DOC) and in London on 13 September 2018, both under the direction of Scandic Hotels' former President and CEO Frank Fiskers, rewarded with HSMAI Region Europe's Outstanding Leadership Award last year.

"I am delighted to be associated with HSMAI in this way and am looking forward to contributing and sharing experience of key success factors for their important initiative by giving back to the hospitality industry, which over so many years gave me such a wonderful professional life", he says.

Frank Fiskers' amazing achievements, positive energy and special gift for speaking publicly has made him well respected in the hotel and travel industry globally. He has held leadership roles in the hotel industry for 25 years across multiple countries throughout Europe and Africa, and has held a number of top executive positions in reputable hotel corporations such as Carlson Rezidor Hotel Group and Hilton Hotels Worldwide.

For more than seven years he was the President and CEO of Scandic Hotels and led Scandic to world-wide recognition and multiple awards for its outstanding work within sustainability. Scandic almost doubled from 130 to 230 hotels under his leadership and he raised the group to the strongest share price in the world among all listed hotel companies. He has also been a driving force behind getting "accessibility" on the agenda of the hotel industry.

The Curate concept is a global one, to be held twice a year in various regions, starting in America and Europe, in close cooperation and with mutual attendance between the regions.

The subject for the first Curate events are yet to be decided, but according to the HSMAI leadership partakers are in for a treat.

"We are extremely pleased that Frank Fiskers agreed to take on this challenge," says HSMAI Region Europe's President and CEO Ingunn Hofseth, while explaining the Curate concept in some detail:

"A standard Curate agenda will include a pre-event survey to all delegates in order to identify current and emerging trends which are top of the participants' mind, and that they would like to discuss with industry colleagues," she says. "Also, there will be an evening social function prior to the day of the meeting, and an opening general session with a recap of survey results or output."

Breakouts focused on the top themes identified in the pre-event survey, each with a moderator who has a basic knowledge on the subject matter, will take place, too, accompanied by a Q & A.

The Curate events are to be held twice a year, to keep pace with the fast rate of change in the hospitality industry.

"The events will provide an inspirational forum to enable corporate executives and others to discuss, anticipate and deal with the most critical business issues that impact performance based on industry sentiment research done prior to each Curate," Ms. Hofseth continues, adding:

"They will also provide 'meeting minutes' of these most critical issues along with curated problem-solving insights that participants can take back to their companies. We aim at prioritising and framing those issues in a way that will guide the association's programme of work and content development plan. One of the unique aspects of the event will be the mix of corporate attendees and conversation across all disciplines of sales, marketing, distribution, culture and people, revenue management and innovation, as well as company types represented in the HSMAI organisational membership."

Attendees at Curate must be senior executives from the HSMAI organisational membership companies. They will identify emerging trends and issues and recommend actions. 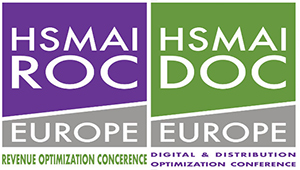 HSMAI Region Europe is committed to growing business for the hotel, event and travel industry and their partners, and is the industry's leading advocate for intelligent, sustainable revenue growth on a local, national and European level. The association provides practical tools, insights, and cutting edge expertise to enable knowledge sharing and enhance professional development as well as fuel sales, inspire marketing, transform businesses digitally and optimise revenue.

HSMAI Region Europe sets up meetings and conferences about interesting topics and also around the latest trends and research outcomes. They hand out awards and organise think tanks and roundtables with the industry's leading experts where, amongst other things, they take on industry questions and challenges. HSMAI offers several globally recognised certifications on revenue management, digital marketing and an Executive Coaching programme on Excelling at Customer Centricity, all to urge the importance to keep learning and developing.

Their six European Advisory Boards (Revenue Optimisation, Marketing and Branding, Sales, Distribution & Customer, Innovation and People & Culture) comprise all fields of the industry. They are HSMAI advisors and at the same time they learn a lot from each other. In addition, they are now about to launch National Advisory Boards in some of the key markets in Europe. For more information about HSMAI Region Europe, please visit us at https://hsmai.eu/