AUSTIN, TX — Duane Parrish of the South Carolina Department of Parks, Recreation and Tourism has been named national State Tourism Director of the Year for 2019.

Parrish was announced as the honoree before more than 1,000 destination marketing professionals at the U.S. Travel Association's annual Educational Seminar for Tourism Organizations (ESTO) conference, the premier annual gathering for destination and tourism leaders, held this year in Austin, TX. U.S. Travel's National Council of State Tourism Directors—a body representing the tourism offices of all states and U.S. territories—votes on the award annually ahead of ESTO. 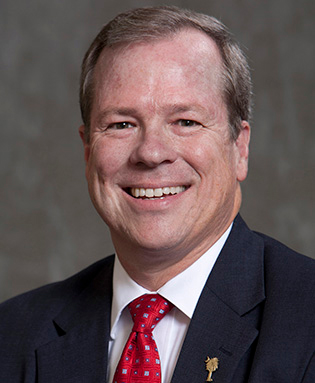 Since taking the helm of South Carolina's tourism agency in 2011, Parrish has overseen six consecutive years of growth in the Palmetto State's tourism industry.

"Duane Parrish has taken the South Carolina tourism industry to new levels of success," said South Carolina Governor Henry McMaster. "Under his leadership, tourism has grown by more than 50%, becoming a $22.6 billion industry and employing one out of every 10 South Carolinians. Nobody is more deserving of this prestigious award than Duane, and we are proud that his peers have recognized him for his leadership and success."

South Carolina's tourism growth can be attributed to Parrish's forward-thinking mindset, tenacity and enthusiasm for all things South Carolina. Just a few weeks ago, the South Carolina State Park Service announced record-setting revenue for the second year in a row, bringing in about $34 million. Ten years ago, the state park service was only able to cover 73% of its expenses and now covers 100% of its operational costs. This was a major step in Parrish's plan to grow South Carolina tourism.

Additionally, Parrish led an ambitious social media campaign to draw visitors back to the state in the aftermath of Hurricane Florence in 2018. Parrish focused his efforts on encouraging visitation in the typically quieter fall months and elevating lesser-known destinations on the South Carolina coast that were open for business.

"Duane is the perfect ambassador for South Carolina and a phenomenal advocate for its travel and tourism industry," said U.S. Travel President and CEO Roger Dow. "He understands the complex, evolving nature of this industry, and his innovation in promoting South Carolina to visitors has influenced the state in profound ways. This award is in recognition of not only Duane's contributions to travel, but his passion for his home state and commitment to bettering the lives of the thousands of South Carolina workers whose jobs are supported by a thriving state tourism industry."

Parrish has worked in travel and tourism for more than 35 years, and previously served as president of the Premier Hospitality Group.

Candidates for State Tourism Director of the Year are nominated by state and territory tourism directors. A slate of three finalists is presented annually for selection by ballot.

U.S. Travel Association is the national, non-profit organization representing all components of the travel industry that generates $2.6 trillion in economic output and supports 15.8 million jobs. U.S. Travel's mission is to increase travel to and within the United States. Visit ustravel.org.