The African hotel market experienced another eventful and evolutionary year in 2017.

The continent continued to attract new regional and global investment, whilst economic and political events, currency shifts and fluctuating tourism demand brought both risks and rewards to hotel markets across the region.

"Both upward and downward trends were noticeable across the continent in 2017, with more positive conditions in West Africa as oil economies geared up in response to a recovering oil price," says Wayne Troughton of African-based specialist hospitality, real estate and leisure consulting company, HTI Consulting. "Political instability in several East African countries served to dampen those markets in the area, albeit on a temporary basis," he said.

HTI Consulting here provide a brief summary of the top and bottom five performers across 14 African cities for 2017, as indicated by STR Global.

Occupancy rates, Average Daily Rates, rooms sold and future supply have all been taken into account.

In terms of occupancy growth, Lagos and Accra led the 14 African cities assessed (vs. Cape Town and Lusaka in 2016) as gradual economic recovery in the countries of Nigeria and Ghana saw both these cities benefit from increased business demand. Growth in Lagos came off a low base, however, and, in light of more positive economic projections, should see future occupancy rates boosted to former highs.

Nairobi's (Kenya) occupancy performance was the weakest of the cities assessed, with a decline in occupancy of 11.1%. Here, new supply (an additional 478 rooms, of which 334 were internationally branded - Four Points by Sheraton, Park Inn) coupled with a decline in demand due to the violence surrounding the August 2017 elections substantially reduced accommodation demand. Dar es Salaam (Tanzania) followed Nairobi with a decline in occupancy of 9%. This was driven largely by investor uncertainty in new government policy, limiting business travel to the city. Additionally, direct flights to key tourism destinations reduced leisure demand in Dar es Salaam.

Lower occupancies in Addis Ababa (Ethiopia) and Gaborone (Botswana) continued into 2017, following an occupancy decline of 10.% and 7.1% respectively in 2016. Although supply increased in these cities, demand declined due to political unrest (Addis Ababa) and economic challenges driven by mining (Botswana).

Nine of the cities assessed achieved ADR growth in US Dollar terms in 2017, as opposed to only two of the 13 cities reviewed in 2016. Windhoek (Namibia) was the market leader followed by South Africa's Cape Town, Pretoria, Sandton and Umhlanga. Strong growth in these cities was driven largely by the strengthening of the SA Rand against the US dollar (the Namibian dollar is pegged against the SA Rand). However, in local currency terms, only Windhoek (9.9% growth) and Cape Town (7.2% growth) were positioned in the top five growth markets. Local currency growth in the Pretoria, Sandton and Umhlanga markets was well below inflation (5.4% in 2017).

In USD terms Lagos showed the biggest decline in ADR of 19%. The Naira depreciated against the dollar by approximately 16.5% in July/August 2017 driving ADR in USD downwards. In local currency terms ADR increased by 5.4%. Nairobi followed Lagos with an ADR decline of 8.4%. Here, increased supply coupled with a decline in demand forced hoteliers to compromise on rate with a knock on effect for ADR. A similar situation was apparent in Dar es Salaam. The former leader in terms of ADR growth in 2016, Lusaka was one of the weakest performers with negative ADR growth (in USD) of -6.2%. In local currency Lusaka's ADR declined by 13.4%. ADR in Accra reduced by 3.2% in terms of USD but grew by 7.6% in local currency.

The economic recovery in Nigeria saw the number of room nights sold in its capital city, Lagos, increase by 17.6%. This significant increase offset the 2.5% growth in supply . A similar situation was experienced in Accra, which saw a rise in roomnights sold to 13.7% as the economy emerged from a recent slump. Pretoria revealed positive demand increase as investment in casinos and commercial office space in new nodes drove growth. One of the growth leaders in roomnights sold in 2016, Cape Town showed negative growth in 2017 (-0.2%). New supply in the market has not yet been included in STR data and demand accommodated at such properties would therefore not be reflected which has influenced a downward trend in demand growth. Demand is therefore widely believed to have increased.

Dar es Salaam showed the biggest decline in terms of room nights sold in 2017. An uncertain investment environment, coupled with a ban on the export of unprocessed gold and copper ore, did much to deter investors over this period. Room nights sold declined by almost 6.0% in Addis Ababa, with the State of Emergency in Ethiopia (only lifted in August 2017) limiting opportunities for a recovery in visitor demand. The slowdown in the mining sector in Gaborone negatively impacted demand in Botswana's capital city, whilst the continued election violence in Nairobi led to a 3.3% reduction in total number of rooms sold.

The number of hotel projects under construction remains highest in Addis Ababa . Several projects expected to come online in 2017 experienced delays and should be realised during the course of 2018. These high levels of new supply (if all completed) are set to increase pressure on an already struggling market meaning that medium term outlook is therefore subdued.

Planned supply in Lagos and Nairobi remains high and continues to place pressure on competitors. The nodal nature of competition in both cities is enabling quality developments, offering international standards and value for money, to continue to outperform market trends.

Also nodal in nature, Accra is expected to experience an increase in supply of just fewer than 900 new rooms. A large proportion of this supply will be positioned in the expanding airport node. The pace of growth in the city, combined with new oil and gas related investment is expected to limit the impact of the new supply on occupancy rates. Competitive pressure is therefore expected to be short term. 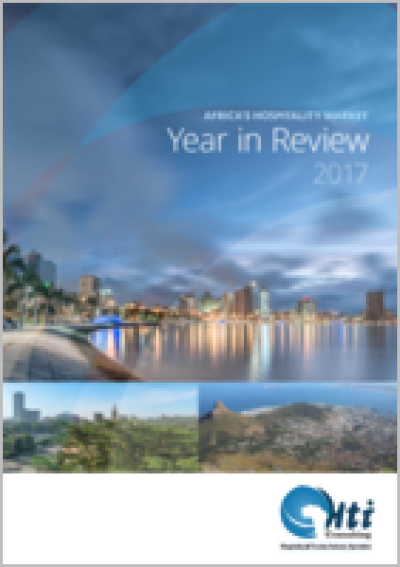 HTI Consulting here provide a brief summary of the top and bottom five performers across 14 African cities for 2017, as indicated by STR Global. Occupancy rates, Average Daily Rates, rooms sold and future supply have all been taken into account in our analysis.
Download document (897 KB)

Wayne Troughton is Founder & CEO of HTI Consulting, a specialist tourism, hospitality and leisure consulting company focusing on Africa and the Middle East and with offices in Cape Town and Mauritius. Wayne has worked in the hospitality, leisure and tourism industries for over 30 years. He has held positions in 5-star hotels in the UK and SA, and later as an Associate Director at Grant Thornton.