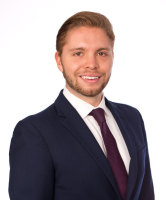 Horwath announces the addition of Marco Roca, Jr. to his Miami consulting office. Marco is a recent graduate of the University of Georgia Honors Program, with a Bachelor of Arts in International Affairs and International Political Economy. He graduated Phi Beta Kappa and was one of only 10 fully funded research scholars in his graduating class. During his time at the University of Georgia, Marco was able to study and work abroad in Spain, China, Antarctica, Australia, and Oxford, England. He most recently was an investment-banking intern with J.P. Morgan. He is fluent in Spanish, proficient in French and Portuguese, and is a tri-citizen of the United States, Mexico, and France. Marco's consulting expertise has been guided by his various prestigious leadership experiences including service as: president of the Honors College; President of the Blue Key Honor Society at the University of Georgia; editor-in-chief of the Georgia Political Review; and founder of Essay Busters: Athens, a charity to help underprivileged high school students navigate the college admissions process.

31 January 2018 — Horwath HTL Miami Managing Director Andrew Cohan recently announced the appointment of Agnes Pierre-Louis to his Miami strategic consulting team. Agnes is based in Miami Beach, Florida, and has industry experience in the UK, Europe and the Caribbean.
read more