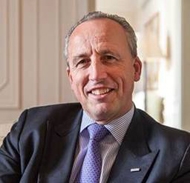 Fairmont Hotels & Resorts announces the appointment of Kiaran MacDonald to Regional Vice President, Bermuda and Caribbean, and General Manager, Fairmont Southampton. In this role, Mr. MacDonald will direct the operation of Fairmont Southampton, the premier resort and meeting venue in Bermuda, as well as oversee the operation of Fairmont Royal Pavilion in Barbados and Fairmont Mayakoba, a AAA Five Diamond resort in Mexico. Mr. MacDonald brings more than 34 years of hospitality experience to this position. He began his career at the London Tara Hotel, and held progressive positions at the Royal Garden Hotel in London and The Metropole Hotel in Birmingham. Mr. MacDonald joined Fairmont in 1995 when he relocated to the United States as Director, Food & Beverage at Fairmont Scottsdale Princess and was subsequently promoted to Hotel Manager in 1998. In 1999, he transferred to the Fairmont Waterfront in Vancouver as General Manager before returning to the Fairmont Scottsdale Princess in 2003 as General Manager. Mr. MacDonald returned to England in 2006 when he was appointed General Manager, The Savoy, one of the most storied hotels in London, where he was responsible for the successful re-opening and re-positioning of the hotel. He was subsequently appointed to his most recent position as Managing Director, The Savoy in 2012. Active in the community and the hospitality industry while at The Savoy, Mr. MacDonald was Chairman of The Northbank Business Improvement; Chairman of The Advisory Board Springboard Charity; Member of The Advisory Board of International Duke of Edinburgh Award; Master of Innholder; and Fellow at The Institute of Hospitality. Mr. MacDonald holds an Honorary Doctorate of Science from the University of West London and a Bachelor of Science Degree from the Catering International Management Association in the United Kingdom.
Hotelschools.com

9 January 2018 — Jens Moesker has been appointed Regional Vice President, Pacific Northwest and General Manager of Fairmont Pacific Rim in Vancouver, BC. Jens joins Fairmont Hotels’ from his most recent position as Area Manager and General Manager of the Shangri-La Hotel Toronto where he oversaw the North American properties.
read more

9 January 2018 — Fairmont Vancouver Airport is pleased to announce the appointment of Cari Bower as Director, Leisure Sales. Based in Toronto, she will oversee the leisure and entertainment markets for the award-winning hotel that has been ranked #1 Airport Hotel in North America for the past six out of seven years by Skytrax.
read more