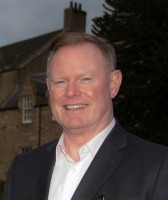 Originally from Michigan in the US, Michael began his career in the hospitality industry with Marriott. He has held a variety of positions, including a remit to look after 55 hotels across six South East American states. He moved across the Atlantic in 2004 and has since held posts including the running of Dungiven Castle in County Londonderry before opening and later selling a chain of diners throughout Northern Ireland. Macdonald Pittodrie House Hotel lies within easy reach of Aberdeen and Inverurie, and is set within a 2,400-acre estate which benefits from the beautiful backdrop of Aberdeenshire landmark, Bennachie. The venue is a popular choice for everything from family holidays and romantic breaks to corporate events and weddings thanks to its excellent facilities which include a range of beautifully appointed rooms, excellent event facilities and the acclaimed Mither Tap restaurant.

26 June 2017 — Johan Scheepers has been appointed as the new Regional General Manager for Macdonald Hotels & Resorts in the North West. With 20 years’ experience in the hospitality industry, Johan will be based at the Macdonald Manchester Hotel & Spa, the largest 4-star hotel in Manchester.
read more

13 June 2017 — Keith Pickard has been named as group director of golf, leisure & spa by Macdonald Hotels & Resorts. He steps up from his previous role of director of golf at the UK independent hotel chain. Pickard will oversee each of the lifestyle departments of the 45-strong hotel group, including 21 spas.
read more
More from Macdonald
Map
Advertisements
Never miss a story again
Sign up for the HN360 daily newsletter
Media Kit – Submit Content
Advertisement
Advertisements