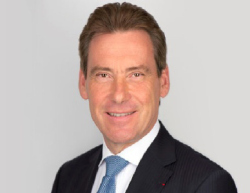 Boidin will oversee all hotel, restaurant, night-life and well- Being of the Group. He will also be responsible for the Hospitality Sales Department, Hotel Operational Marketing and Revenue Management, as well as Group Purchasing. Didier Boidin is a specialist in luxury international hotels, with 36 years spent with the InterContinental Group. He was recently head of the group's Luxury Division for Europe after serving as Vice President Operations for the Mediterranean region between 2003 and 2010. During his career, Didier Boidin has also managed prestigious establishments, including the InterContinental of London, Montreal, the Grand Hotel of Paris and the Hotel Carlton of Cannes. Didier Boidin will start his new role as of March 20

With the State of Monaco as its main shareholder, the Monte-Carlo SBM Resort employs almost 3000 people and manages holdings that are truly unique in the world. Its activities touch upon a variety of areas related to tourism, leisure, business, casinos, gastronomy, well-being, culture and sports.
more information
Recent Appointments at SBM

10 November 2015 — The Société des Bains de Mer has annouced a new general director of gaming. Pascal Camia, who has been the director of the Hôtel Hermitage, holds a Master of Economics, a hotel management degree and a Corporate MBA.
read more

30 July 2013 — Monte-Carlo Beach Club on Abu Dhabi’s Saadiyat Island has appointed Bill Loveday as the new general manager. With more than 25 years’ experience in the industry, Loveday most recently ran the Capital Club in Dubai and Bahrain, as well as also previously managing exclusive clubs in the United States, including the Houston Club whose members include former US president George H.
read more