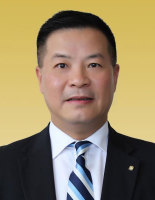 A native of Shanghai, James Xi began his hospitality career at Shanghai Hilton in 1987. In early 1991, he immigrated to the United States to complete his MBA majoring in hospitality management at University of Houston. This commenced his journey with the hospitality industry overseas, where his experience spanned across the prestigious hotel brands, Hilton Hotel & Conference Centre, Embassy Suites Hotel, DoubleTree by Hilton and Adam’s Mark. He held numerous leadership positions at these hotels, including as executive assistant manager and resident manager. James joined Shangri-La Hotel International Management Company in 2002. His first assignment was being the resident manager at Shangri-La Hotel, Dalian followed by the same role at Shangri-La Hotel, Changchun. He was promoted to general manager in 2004 and successfully opened Traders Hotel, Kunshan by Shangri-La; Shangri-La Hotel, Wenzhou; and Shangri-La Hotel, Changzhou in 2005, 2009 and 2012, respectively, with great pre-opening and post-opening achievements. From 2013 to 2015, he led the team at Shangri-La Hotel, Yangzhou and successfully turned around the hotel’s performance, leading to outstanding achievements in market share ranking, gross operating profits and guest service excellence. Moreover, under his leadership, Shangri-La Hotel, Wenzhou and Shangri-La Hotel, Ningbo were awarded “Hotel of the Year” within the entire Shangri-La group in 2010 and 2016, respectively. With his extensive background in operations, astute revenue management and marketing knowledge, as well as his effective leadership, James will lead the team in taking Kerry Hotel Pudong, Shanghai to new heights in the near future.
Hotelschools.com

James Xi (Class of 1993) is a graduate of University of Houston in Houston, Texas - United States
more information