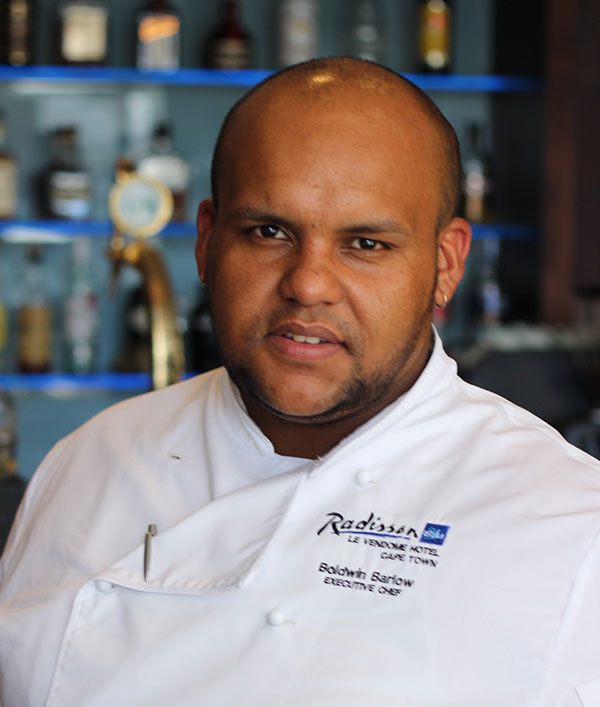 At just 27 years of age, Boldwin Barlow has been appointed as the new Executive Chef at the luxurious Radisson Blu Le Vendome Hotel in Sea Point, Cape Town. Inspired by both French traditions and the local cuisine of his home region, Barlow's style shows a passion for bold innovation and a penchant for creative fusion.

Hailing from the West Coast of South Africa, Barlow draws his inspiration from traditional Cape-style dishes and seafood, which he then fuses with French elements. A passion for learning coupled with a keen sense of adventure drives Barlow to develop exciting new dishes.

His flair for seafood marries well with the Atlantic Seaboard location of the Radisson Blu Le Vendome Hotel. His fine eye for detail matches the polished setting, with its sophisticated décor and upscale facilities including restaurants, a lounge and rooftop swimming pool.

Barlow's interest in becoming a chef piqued at a young age; though his idols include celebrity chefs like Gordon Ramsay and Jamie Oliver, Barlow learned a great deal from his mother and close family members, who are caterers. "In the end, they were the real source of my inspiration," he comments.

Before joining the Radisson Hotel Group, Barlow worked in hotel properties across Cape Town including the Ambassador Hotel and Lord Charles Hotel, as well as the seaside restaurant Sotano and Hartenberg Wine Estate. After joining the Radisson Hotel Group in 2016, Barlow rose rapidly through the ranks from Sous-Chef at Park Inn by Radisson Cape Town Newlands to Executive Chef at Radisson Blu Le Vendome Hotel, where he brings passion, energy and creativity to the kitchen.