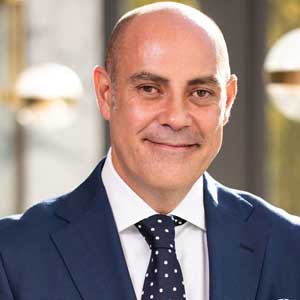 Four Seasons Hotel Seoul welcomes Alejandro Bernabé as the new General Manager of the iconic luxury hotel located in the beating heart of Seoul. Bernabé will oversee all operational facets of the property, continuing to evolve the vision of the Hotel and ensuring its continued success in creating unparalleled, world-class hospitality experience.

Bernabé is a true world resident and a seasoned hotelier with a wealth of international knowledge, experience and leadership skills that will drive and support the team in their continued success. Bernabé's hospitality career began in Asia as a restaurant manager at Colombo Hilton in Sri Lanka then embarked on an exciting journey with Kempinski hotels for more than 20 years that has taken him across many different countries in Asia, the Middle East and Europe. Bernabé has served numerous management positions in food and beverage at various properties leading to his first big appointment as the general manager in Malta at the Kempinski Hotel San Lawrenz Gozo.

Continuing to climb up the ladder, Bernabé became general manager and vice president Southeast Asia for Kempinski in 2013. It did not take long for him to continue this successful path to the top and was promoted to chief executive officer of Kempinski Hotels in 2014. Prior to joining Four Seasons Hotel Seoul, Bernabé was the group director of AVANI Hotels and Resorts in Thailand and was later promoted as vice president operations overseeing the operations and the growth of the brand.

This is his first appointment with Four Seasons Hotels and Resorts however Bernabé is no stranger to the brand and its core values. "I was very eager to work with Four Seasons and patiently waited for the right opportunity," says Alejandro Bernabé. "When they contacted me and told me about the opportunity to lead the team here in Seoul, I was honoured to become a part of such highly esteemed hospitality group known for being a key player in many destinations around the world."

Throughout his career in hospitality, Bernabé has firmly believed that people are the beating heart of a hotel. "I am excited and ready to begin my next chapter with Four Seasons Hotel Seoul," says Alejandro Bernabé. "It is a privilege to be working with such a talented and passionate group of employees - a team that has been recognised for continuously delivering exceptional service and warmth to guests."

A native of Spain, Bernabé spent his early years studying in Madrid before continuing his studies in the United States. He holds a Bachelor Degree in Business Administration from University of Massachusetts Amherst and also studied Hotel Management at Hotel Institute Montreux graduating top of his class. Further to this, Bernabé went on to obtain an Executive MBA by Reims Management School as well as an Asset Management certification from The Cornell Hotel School.

In his free time, Bernabé enjoys travelling and discovering new places with his wife and two children. He also enjoys outdoor activities from skiing to windsurfing and looks forward to exploring Seoul with his family.

1 October 2020 — As the highly anticipated Four Seasons Hotel and Private Residences New Orleans continues to prepare for its grand opening next year, General Manager Mali Carow is overseeing every detail of what will be one of the largest hotels in the company's portfolio.
read more
More from Four Seasons
Map
Advertisements
Never miss a story again
Sign up for the HN360 daily newsletter
Media Kit – Submit Content
Advertisement
Advertisements