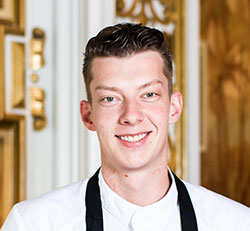 Randy Karman (25), former Sous-Chef of restaurant The White Room is taking over the role of Chef de Cuisine from Arturo Dalhuisen and will lead the team. Together with Signature Chef Jacob Jan Boerma, Karman will continue with the current direction of The White Room. Within three years' time since its opening, The White Room has acquired one Michelin star. Arturo Dalhuisen has decided to leave The White Room to pursue his career outside of the company. NH Hotel Group thanks him for his passion and dedication and wishes him all the best in his future endeavors.

Randy Karman started his career in 2012 as an apprentice in various Michelin starred restaurants under the leadership of top chefs. He worked as Chef de Partie for one year in Jacob Jan Boerma's Restaurant De Leest in Vaassen. Followed by his next role as Demi Chef de Partie at Restaurant Bord'Eau* of hotel De l'Europe in Amsterdam to broaden his culinary horizon.