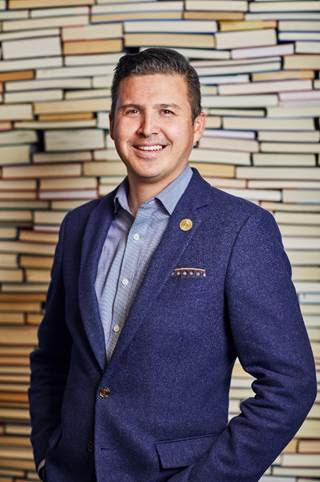 Hotel Emblem San Francisco, Viceroy Hotels & Resorts' provocative new boutique property centered on the spirit of the Beat Generation, is proud to announce Xavier Bon as its Director of Sales and Marketing. In his new position, the hospitality veteran culls from his extensive background to lead sales and marketing efforts at the newly opened, 96-room property - a creative stage designed to inspire guests to stand out from the crowd with eclectic guestrooms, stimulating events, rich cultural and wellness experiences, and authentic hospitality.

As Director of Sales and Marketing, Bon is responsible for overall guestroom and event revenues as well as the hotel's branding and positioning in the marketplace. Ideally located in San Francisco's Theater District where Nob Hill meets Union Square, Hotel Emblem celebrates and embraces the path less taken, enticing travelers to think freely, be bold and act fearless.Bon comes full circle at Hotel Emblem, where he makes his return to the property that launched his hospitality career exactly 20 years ago at the bell desk at the formerly-named Hotel Rex by Joie de Vivre. Bon quickly rose through the ranks during his 17-year tenure with Joie de Vivre - in 2005, he was a part of the team responsible for opening the company's waterfront flagship, Hotel Vitale, followed by another stint at Hotel Rex, where he was twice-named Salesperson of the Year, and eventually led sales and marketing at Hotel Kabuki. In 2017, Bon joined Proper Hospitality to open the much-acclaimed San Francisco Proper, before joining Viceroy Hotels & Resorts to launch Hotel Emblem.

20 February 2020 — Viceroy Los Cabos - the premier oceanfront resort located in the heart of San José del Cabo - is pleased to announce the appointment of Peter Bowling as Regional Managing Director. A world-renowed hotelier, Bowling brings over 20 years of experience to his new role where he will oversee Viceroy Los Cabos as well as operational guidance for future Viceroy developments in Latin America.
read more