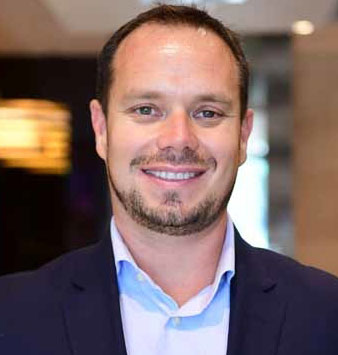 Davies graduated in hotel management from the University of Johannesburg and in 2001 started his hospitality career with Marriott in London. Over the last 18 years, he has held leadership roles across operational and sales disciplines including front of house manager, sales manager and more.

In 2015, Davies joined Marriott Marquis, Doha as the director of rooms operations and later as acting hotel manager. He joined the Dubai MEA Marriott Corporate Office as director of rooms, spa and guest experience for the MEA region and is an honorary member of the front of House Managers Association (AICR) where he held the position of international president for 5 years.

He aims to strategically achieve the company's goals along with developing team members.

11 June 2021 — Courtyard By Marriott, Agra has announced the appointment of Sanjay Rawat as their Executive Chef. With numerous years of experience across India, Over the span of his career Chef Rawat has been associated with leading hospitality groups such as Hyatt Hotels & Resorts, The Oberoi Group and an extensive experience with Marriott International itself.
read more

11 June 2021 — W Los Angeles - West Beverly Hills is pleased to announce the appointment of Damien Hirsch to the role of general manager. Hirsch brings a wealth of hospitality knowledge to the iconic W hotel, aiming to position the luxury property as a destination within itself while managing the hiring, training and retention of uniquely diversified teams.
read more

7 June 2021 — JW Marriott Nashville, Nashville's first true luxury hotel brand, today announced the appointment of Fabrizio Calvo as the General Manager. The 20-year veteran of the industry is joining the property as it leads the revival of the Nashville tourism market with its blend of luxury accommodations, great food and beverage, and central location.
read more
More from Marriott
Map
Advertisements
Never miss a story again
Sign up for the HN360 daily newsletter
Media Kit – Submit Content
Advertisement
Advertisements