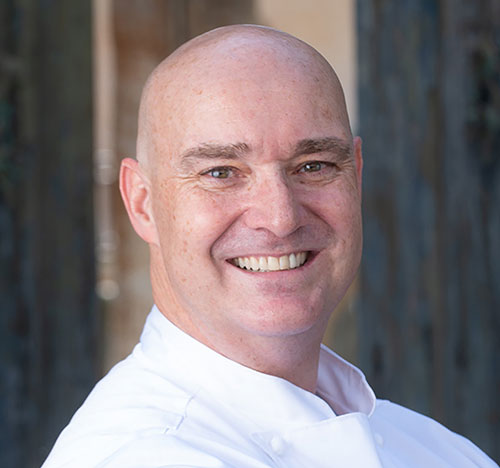 Chef Lee Hillson is getting back to his roots and returning to the iconic T. Cook's at Royal Palms Resort and Spa, part of the Unbound Collection by Hyatt, as executive chef where we will lead all food and beverage operations for the historic resort. Chef Hillson spent 12 years at T. Cook's back in the early 2000s.

A culinary veteran of nearly 30 years, Lee Hillson is going back to his roots and returning to the iconic T. Cook's at Royal Palms Resort and Spa as executive chef where he will lead all food and bever age operations for the historic resort.

Starting in 2000, Chef Hillson made a name for himself at T. Cook's during his 12-year tenure where he began as sous chef and later promoted to executive chef. He left a lasting impression with his rustic Mediterranean cuisine and signature accoutrements like the orange marmalade, made from the resort's on-site citrus grove, and what's now become the restaurant's legendary pesto.

Hailing from England where he started culinary school at 16-years-old, Hillson brings a worldly approach to his cuisine after traveling through the Mediterranean, Hawaiian Islands and Alaska as a guest chef on luxury cruise lines. A James Beard House-featured Chef who has also appeared on the popular Food Network show, Iron Chef America, Hillson has created remarkable meals for luminaries such as President George W. Bush, Barbra Streisand, Princess Diana, Richard Branson, Billy Joel and author, Clive Cussler, to name a few.

H illson's talents have allowed him to cook in some of the most prestigious restaurants around the world including the Michelin-Starred Le Gavroche in London and Vanderbilt Hall in Newport, Rhode Island, named one of the top five restaurants in the country by Country Inn Magazine.

A four-time nominee of the Arizona Culinary Hall of Fame, Hillson has most recently spent his time at some of the Valley's most well-known and well-respected culinary institutions including Sheraton Grand at Wild Horse Pass, home to Kai, the state's only five-star restaurant from Forbes and Five-Diamond restaurant from AAA, and all seven restaurants at The Phoenician Resort in Scottsdale.

In his free time, Hillson enjoys reading, Orange Theory Fitness, golfing, going to the movies, traveling and entertaining friends and family at home.

14 July 2020 — Ingrid F. Braun, General Manager, has spent the majority of her 17-year hospitality career in luxury lifestyle hotels in Southern California, overseeing several hotel renovations and openings. Most recently, she served as the opening Hotel Manager of the Santa Monica Proper Hotel where she oversaw all hotel operations and guest relations for the 271-room property.
read more

14 July 2020 — Nathan Lingle, Executive Chef, joins Mar Monte Hotel with extensive experience in owning and operating a variety of top restaurants across the U.S. After graduating from the Culinary Institute of America and serving in several positions at The Ritz-Carlton Resort in Naples, Florida, Chef Nathan was named Executive Chef and Food & Beverage Director at The Ritz-Carlton, Philadelphia.
read more
More from Hyatt
Map
Advertisements
Never miss a story again
Sign up for the HN360 daily newsletter
Media Kit – Submit Content
Advertisement
Advertisements