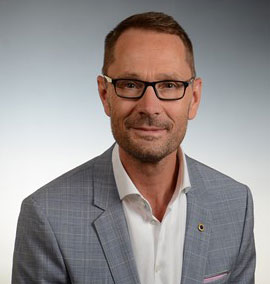 The IntercityHotel Hamburg Dammtor-Messe opened for business in 2014 under the management of Thomas Nixdorf, who began his career as a General Manager at IntercityHotel when the IntercityHotel Hannover launched. Mr. Nixdorf originally trained as a hotel specialist at the Central Hotel Kaiserhof Hannover. He subsequently became Night Auditor at the Quality Inn Hotel Plaza Hannover before moving on to become a Sales Representative at the same hotel in 1991. After a rebranding Nixdorf took over in the team Hotel Plaza the position of the Front Office Manager and from 1994 in addition to the Resident Manager. In 1996 he was appointed General Manager. In 2012, Nixdorf received the "General Manager of the Year" award from IntercityHotel. He will head up the pre-opening phase at the IntercityHotel Hannover Hauptbahnhof Ost with effect from 1 October 2019.

8 July 2020 — Britta Beringer knows the hotel extremely well after having spent many years as Director of Sales & Marketing and as Deputy General Manager. She has displayed a sure instinct and tireless commitment over the past few months and has provided excellent guidance to her team throughout the phase of closure and reopening.
read more

6 July 2020 — He will be responsible for the development of all areas of the 229-room hotel in the lead-up to its official scheduled opening in the autumn of 2020 and subsequently for the management of the hotel. As General Manager, Mr.
read more