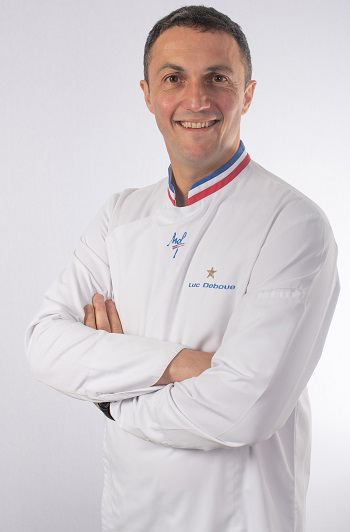 Luc Debove has just been appointed Executive Pastry Chef at École Ducasse - National School of Pastry (E.N.S.P.), a world-renowned reference and pastry school in the pastry arts and frozen arts located in Yssingeaux.

With an exceptionally rich career for 30 years in starred houses and schools with unique skills, Luc Debove is Ice World Champion and Meilleur Ouvrier de France Glacier, he will be a valuable asset for the development of the world. NPHS in France and abroad.
Photo Credit © Summit Education

With an exceptionally rich career for 30 years in starred houses and schools with unique skills, Luc Debove is Ice World Champion and Meilleur Ouvrier de France Glacier, he will be a valuable asset for the development of the world. NPHS in France and abroad.

After a CAP pastry, an apprenticeship in pastry confectionery and chocolate, and obtaining his diploma Master pastry chef in 1996, Luc Debove joined in 1999 the Meridien Beach Plaza teams in Monaco as Pastry Chef, before joining the teams from the Royal Riviera of St Jean Cap Ferrat. At the same time, he became professor of pastry mastery at the Alpes-Maritimes Chamber of Trades. He then went to Paris as pastry trainer at Ecole Bellouet Conseil.

Starting in 2007 for 9 years, he became Pastry Chef of the Grand Hotel Cap Ferrat, the famous Four Seasons hotel of the French Riviera and Michelin-starred, where he will lead a brigade that will count until 25 pastry chefs. Professional experiences complemented many competitions throughout his career. In 1995, Luc Debove won the 1st Prize for Artistic Sugar Pieces in Nice and received the 1st Prize of the National Cup of Sculptures in Water Ice in 2006. The year 2008 will see the consecration of his work with obtaining the title of French champion of water ice sculpture, very quickly followed by the 1st Open Ice Desserts Award and the European Trophy at Sirha in Lyon.

In 2010, he became Ice World Champion in Rimini. It is in 2011 that he is named Meilleur Ouvrier de France Glacier. His career and expertise were rewarded in 2015 with the distinction of the National Order of Agricultural Merit.

A variety of experiences that have allowed him to acquire valuable qualities and to be as comfortable in pastry, ice cream, bakery, confectionery and chocolate, as well as in teaching and transmission of the know-how he has wanted to serve the École Ducasse - National School of Pastry.

Today at age 47, Luc Debove takes the position of Executive Pastry Chef at the Yssingeaux School: "I am delighted to join the teams of E.N.S.P. and to be able to accompany them in the years to come in their development in France and abroad. "

Luc Debove will be in charge of the teams of E.N.S.P. to develop the future programs of the school and to ensure its influence in France and abroad. He will teach masterclasses for young learners and professionals. Ambassador of the United Nations, he will strengthen the influence of the school internationally through events, training and counseling, and launching new programs.