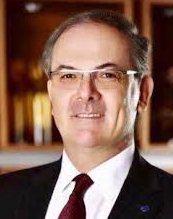 Christian R. Baudat has been appointed General Manager of the newly opened Oakwood Suites Yokohama, in addition to his role as Director of Operations for Japan and South Korea.

A Swiss national, Christian has more than 30 years of hospitality industry experience and has worked in the Middle East, Singapore, Europe and Japan.

With a hospitality career that commenced as Food & Beverage Management Trainee with Hilton Tokyo in 1985, Christian has managed properties under the Hilton brand in Tokyo, Nagoya, Otaru and Fukuoka.

Christian has made significant contributions to the Japanese hospitality industry and was the General Manager responsible for establishing the iconic Hilton Fukuoka Sea Hawk as one of Japan's leading venues for MICE business and wedding in 2010.

In 2015, Christian executed ground-breaking commercial strategies during the pre-conversion of Hilton Tokyo Odaiba, resulting in the hotel's top market share position within two months of operation.

Oakwood Worldwide®, based in Los Angeles, Calif., is the leading provider of corporate housing and serviced apartment solutions through its two well-known brands, Oakwood® and ExecuStay®. Both brands provide move-in-ready furnished housing designed to meet the needs of business travelers on long- and short-term assignments.
more information
Recent Appointments at Oakwood