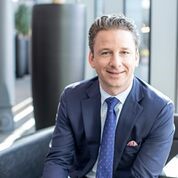 With over 20 years of global hospitality experience, von Süsskind joins Mandarin Oriental, Boston, from Stanton House in El Paso, Texas, where he served as General Manager. He has gained significant managerial experience in a variety of esteemed luxury hotel brands: Kempinski Hotels at the Hotel Vier Jahreszeiten in Munich; The Ritz Carlton Hotels Co. in Cancun, San Francisco, and Dubai; a variety of Capella Hotels throughout Germany and the United States; and The Plaza Hotel Pioneer Park in El Paso, Texas.

Originally from Hamburg, Germany, von Süsskind graduated with a degree in Hotel Management from the International School for Hotel and Catering Business in Germany, and is fluent in English, Spanish and German. He recently moved from Texas to Boston for his new role, joined by his wife Neda and their three children; they reside in Brookline, Mass.

12 July 2021 — Mandarin Oriental Hotel Group has appointed Richard Langonne as General Manager of Mandarin Oriental Wangfujing, Beijing, taking over from Mark S Bradford, who was at the helm for three-and-half years and has now been given the important mission of establishing a new luxury Mandarin Oriental hotel in the southern China city of Shenzhen.
read more