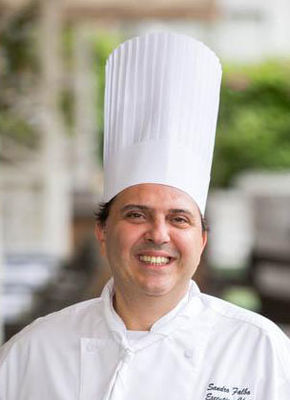 Rancho Pescadero, the highly anticipated luxury resort making its debut in Todos Santos this Fall, has appointed Chef Sandro Falbo as Culinary Director. A seasoned epicurean with more than three decades of experience in top-rated restaurants and luxury properties across the globe, Chef Falbo brings his talents to the dedicated team at Rancho Pescadero, where he'll be at the helm of the resort's ethnobotanical culinary program, celebrating cuisine authentic to the Baja region.

Hailing from Rome, Sandro began his career in several of the Italian city's notable restaurants before venturing to the UK, Madagascar, South Africa,The Bahamas and Shanghai to work in the kitchens of celebrated restaurants and Michelin starred chefs. He has brought bold flavors and innovative techniques to a discerning global audience while leading culinary teams at international luxury resorts that include Waldorf Astoria in Dubai, Hilton Singapore, Bertorelli's Restaurant in London, Intercontinental Dubai, Hotel Kempinski Beijing, Four Seasons Resort Great Exuma, Conrad Hotel Hong Kong, and the Fullerton Hotel and Fullerton Bay Hotel in Singapore. Most recently, he was executive chef at One&Only Palmilla in Los Cabos, where he oversaw a team of 200 employees and led the property's locally inspired, farm-to-table culinary experiences in addition to special events.

In his new role as culinary director, Falbo is responsible for daily operations of Rancho Pescadero's dining portfolio. With lush gardens spread throughout the 30-acre oceanfront property, he has a wealth of organically and sustainably farmed herbs, fruits and vegetables at his disposal. Sandro will oversee the resort's Botánica Garden Restaurant, an immersive culinary experience located next to the property's huerta that celebrates the ingredients of the earth; Centro Café, an all-day dining space with dishes that speak to the soul of Mexico; and Kahal Oceanfront Restaurant, a chic, beachfront dining experience complete with an elegant raw bar. His menus will showcase a mix of traditional flavors and elevated gastronomy, often with a nod to his roots - think dishes like Lobster Ravioli made with Mexican spices and plates garnished with freshly smoked herbs from the property's gardens.

Social responsibility and giving back are extremely important to Falbo, who helped open a school in Hospitality Cambodia and says that one of the things that attracted him to Rancho Pescadero was the team's dedication to helping the local community thrive.

Just an hour north of Cabo near the artist’s enclave of Todos Santos, Rancho Pescadero is a destination for those looking to immerse themselves in the nature, rich culture and beauty of Mexico’s Baja region.
More