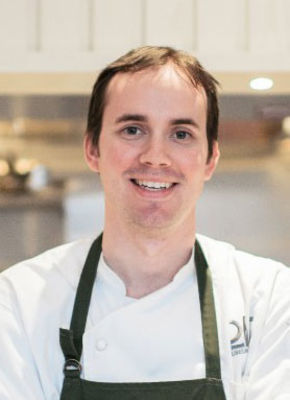 The Woodstock Inn & Resort announces the appointment of Matthew McClure as the new Executive Chef, effective September 1, 2022. McClure is an award-winning chef who brings more than 20 years of culinary experience to his new position.

As the Executive Chef, McClure will oversee all culinary operations within the Resort, including the five restaurants, the Red Rooster, Richardson's Tavern, Fairway Grill, Perley's Pourhouse, and the Red Barns at Kelly Way Gardens, as well as in-room dining, employee cafeteria, corporate, social and wedding events. While providing oversight to both front- and back-of-the-house operations, McClure will lead the resort chefs and the entire culinary brigade.

McClure will also work closely with Master Gardener Benjamin Pauly and the Kelly Way Gardens team to build seasonal menus for the Resort's restaurants. Kelly Way Gardens is a Vermont certified organic garden and farm-to-table program that provides the Woodstock Inn & Resort with an on-site holistic food supply. Specializing in unique and heirloom varieties, the gardens provide culinary inspiration to the Inn's chefs and extraordinary experiences for guests.

Executive Chef McClure comes to the Woodstock Inn & Resort from The Hive, a restaurant at the 21c Museum Hotel in Bentonville, AR, where he served as executive chef for ten years. His responsibilities included all food and beverage operations including breakfast, lunch, and dinner services in The Hive dining room, lunch/brunch and dinner service in The Hive Lounge, as well as banquets and room service. McClure also spent the past two years as area executive chef at 21c Hotels in Kansas City, MO, and Oklahoma City, OK.

McClure served as a sous chef at the Capitol Hotel in Little Rock, AR, from 2007 - 2011, where he was responsible for all daily culinary operations within the hotel. He was a sous chef at the Harvest Restaurant in Cambridge, MA, from 2004 - 2007, where he managed a team of 18 line cooks and dishwashers through lunch and dinner services with up to 150 daily and 300 nightly covers. Prior to his work as a sous chef, McClure was a line cook at various restaurants throughout Massachusetts.

In 2012, McClure served as a culinary instructor at Northwest Arkansas Community College in Bentonville, AR, where he taught Center of the Plate and Contemporary Cuisine courses. He also taught menu design and meat and seafood classes at Pulaski Technical College in Little Rock, AR.

Chef McClure graduated from the New England Culinary Institute in Essex Junction, VT, with an AOS degree in Culinary Arts 2002. He is the recipient of numerous culinary awards, including the James Beard Foundation Best Chef "South" Semifinalist in 2014, 2015, 2016, 2017, 2018, 2019, and 2022. He was awarded the Arkansas Food Hall of Fame Proprietor of the Year in 2021, and Food & Wine Magazine People's Choice Best New Chef Midwest in 2015. McClure was a guest on HGTV's "Fixer to Fabulous: Welcome Inn" in 2022, and has recipes featured in Waste Not: How to Get the Most from Your Food by the James Beard Foundation (2018), and America: The Cookbook by Gabrielle Langholtz (2017).

McClure succeeds Rhys Lewis as Resort Executive Chef, who will retire this fall after more than seven years with the Woodstock Inn & Resort.