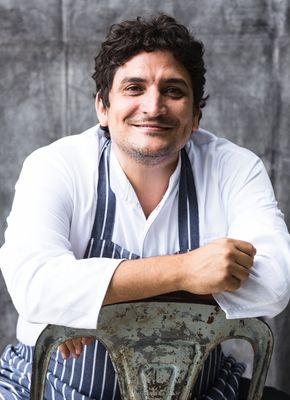 The appointment will mark a first in UNESCO's history that a chef has been entrusted with this mission.

Mauro Colagreco, Chef Patron of the 3 Michelin star restaurant Mirazur in Menton, has created a cuisine that reflects his environmental values, making nature the source of inspiration for his dishes.

The ceremony will take place at 3.45 pm on Friday, November 25, at the UNESCO headquarters in France located at 7 place de Fontenoy, Paris 75007.

Chef Mauro and his team source produce from small local businesses and producers known for their eco-responsible initiatives. In addition, Mauro has been leading his own agricultural project on his five-hectare gardens for the past ten years. This permaculture and biodynamic garden is nurtured by applying collection techniques similar to foraging. The land is respected, rested and reseeded, enriching the soil and allowing harvest to develop organically.

In his menus, he uses ingredients that he plants and cultivates on his land, using nature as a learning space for himself and his team as they become more synchronised with its ecosystem's cycles and the rhythms of the seasons. This thoughtful approach uses nature's elements to produce food at its peak, and many of the ingredients used for his creations come directly from the garden. At Mirazur, these ingredients, combined with a strong creative identity and bold flavour pairing, earned him the ultimate three stars by Michelin. In the same year, 2019, Mirazur was voted No.1, The Best Restaurant in the World at The World's 50 Best Restaurant Awards.

As well as the land, Mauro holds the protection of the oceans close to his heart. He has been a vocal advocate in promoting sustainable fishing initiatives and has found new solutions to remove all single-use plastic from his kitchen and restaurant building. Mirazur was the world's first restaurant to obtain "Plastic Free" certification in 2020 and was awarded a green star by the Michelin Guide that same year. Ever more aware of the interdependence of all living things on earth's land and seas, he aims to stress the impact of food production and consumption on our environment by sharing his ongoing work and continuous research.

A balance between people and their environment

As part of its mandate for sciences, UNESCO created the 'Man and the Biosphere program in 1971, which aims to restore a balance between human beings and their environment. Today, there are 738 UNESCO biosphere reserves around the World, representing more than 1.3 million km² of protected areas.

As a UNESCO Goodwill Ambassador, Chef Mauro Colagreco's role will be to promote the Organization's actions in favour of biodiversity.