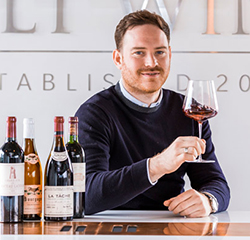 Tom Gearing developed a keen interest in wine throughout his formative years whilst accompanying his father, Philip, on many trips to the Cote d’Or. Tom was displaying an eye for wine from an early age, and even upstaged the esteemed wine professionals at Christies at the age of 13 when he spotted that a 12 bottle case of Domaine de la Romanée-Conti, Romanée-Conti 1959 had actually been reconditioned and not sold in the condition stated at sale. Interestingly that case purchased for £16,000 in 2000 is now worth £150,000!

From then Tom continued to pursue his entrepreneurial flair and participated in Season Eight of the BBC’s ‘The Apprentice’ in 2012, competing against 15 other candidates, eventually finishing runner-up. Since, Tom has spent his entire working life as Director of Cult Wines growing it from a small start-up to one of the UK’s leading wine investment companies with over £95 million of assets under management. Tom regularly features as a market commentator appearing on media outlets such as Bloomberg, CNBC Europe, CITYAM and more.

How Technology Is Changing The Way We Drink Wine

Drinking good wine with good food in good company has been one of life's most civilized pleasures for centuries. As time has changed, so has the way we source and drink wine. Technology has come so far that it has become possible to predict whether you'll like a wine before you even open the bottle and taste it.
Opinion 5 Aug 2019

Like a fine wine, we’ve got better with age and now wine apps are a thing. The world of wine can be overwhelming, intimidating and complex with ‘vionology’ confusing beginner wine enthusiasts wishing to learn more.
Opinion13 May 2019
Organization Details