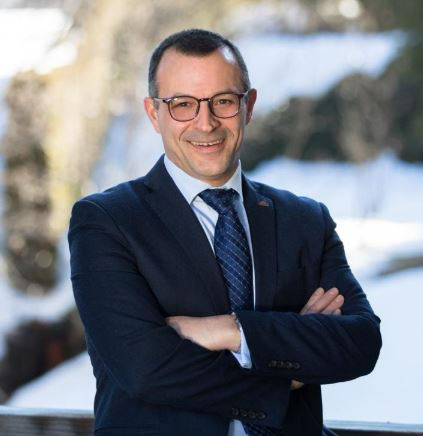 Dr Dimitrios Diamantis brings over 20 years of hospitality research and teaching experience. His areas of expertise include sustainability, ecotourism, destination management, and branding in tourism and hospitality. Dimitrios began his academic career in 1998 as Associate Lecturer at Bournemouth University. The following year, he joined the faculty of Les Roches Switzerland, where he would go on to supervise the launch of the institution’s first MBA programme. In 2007, Dimitrios returned to the UK to teach tourism management at Sheffield Hallam University. He came back to Les Roches Switzerland in 2010, where he continued to teach at the undergraduate and graduate level and oversaw the development of Les Roches’ current Postgraduate Diploma and MBA programmes. Dimitrios has previously taught as Visiting Lecturer at KDU University College (Malaysia), Institut Paul Bocuse (France) and HTW Chur (Switzerland), and acted as External Examiner for several UK universities. Since 2014, he also serves as a member of the judging panel for the Greek Tourism Awards. Dimitrios was appointed Dean of Graduate Studies at Les Roches Global Hospitality Education in March 2016. Dimitrios holds a PhD in Consumer Involvement and Ecotourism from Bournemouth University. He speaks English and Greek.
Organization Details
Insights by Dimitrios Diamantis (2)

What is the Impact of COVID-19 on Sustainability?

Sustainability as a concept has been in a turmoil over the last 35 years. Since the World Commission on Environment and Development Report, commonly known as Brundland Report in 1987, sustainability has been advancing as a concept of developmental strategies in a number of destinations and organizations.
Opinion 9 Apr 2020

The Coronavirus (COVID-19) has been one of the most unpredictable and unknown virus. The statistics on human costs are still raising, as we speak, and its impact has been expressed in terms of economic, social and environmental consequences.
Expert View 4 Mar 2020
Organization Details