Rotana Hotel Management Corporation (Rotana) was founded in 1992, by a partnership between two visionary thinkers, Nasser Al Nowais and Selim El Zyr, who were joined three years later by Nael Hashweh and Imad Elias. Operating as Rotana, it opened its first property, the Beach Rotana Abu Dhabi in 1993 and is today one of the leading hotel management companies within the Middle East and Africa. Rotana is a company offering the best of both worlds. A unique understanding of the culture and communities of the Middle East combined with the collective expertise of an executive team contributing over 35 years of international experience in the service industry. Rotana aggressive expansion plans have seen the company grow from 2 properties in 1993 to a total of 70 by 2012. With several further properties planned for opening and new projects in the pipeline confirming the company’s intention to have a Rotana managed property in all the major cities throughout the Middle East and Africa within the next five years.
Brands operated by Rotana 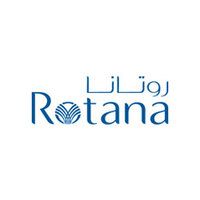 Underlining its hospitality credentials on the international stage, Rotana has been awarded the coveted title of ‘Best Business Hotel Brand in the Middle East’ at the Business Traveller Awards 2021 (UK).
Press Release29 Nov 2021

Reflecting on The Past, Present and The Future with Rotana

As part of the UAE’s ‘Year of the 50th’ Golden Jubilee celebrations, Rotana is commemorating the founding of the nation by reflecting on its glorious past, acknowledging the present and symbolising its new vision for the future.
Press Release22 Nov 2021

Rotana, one of the leading hotel management companies in the region with hotels across the Middle East, Africa, Eastern Europe and Turkey, announced today at the Arabian & African Hospitality Investment Conference (AHIC) the signing of a new project with Bin Al Sheikh Holding Group, a well-diversified Qatari business conglomerate.
Press Release27 Sep 2021