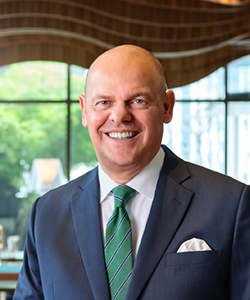 Carlton City Hotel Singapore is pleased to announce the appointment of Douglas Glen as General Manager. Bringing with him an incredible track record with over 30 years of extensive leadership and global luxury hospitality experience, Douglas will be responsible for driving all key operations and strategic initiatives for the 386-room upscale business hotel's continued growth in revenue and brand reputation.

An articulate hospitality professional and enterprising leader, Douglas has successfully managed high-profile, five-star international chain hotels in the United Kingdom and Southeast Asia. He has held various management positions with The Landmark Lancaster Hotel Group, where his fruitful career spans over two decades. As General Manager of The Landmark Bangkok from 2013 to 2018, he played a pivotal role in the overall growth and profit of the five-star hotel, effectively developing a cross-functional culture for continuous improvement.

Born and raised in Scotland, Douglas moved to London in 1985 upon completion of his Hotel and Catering academic qualifications. Making his mark in the banqueting sector during the early stages of his hospitality career, Douglas rose through the ranks to assume the role of Banqueting Manager at Grosvenor House, before moving to The Royal Lancaster, The Hyatt Carlton Tower, and subsequently the London Hilton on Park Lane. In 1999, Douglas joined the Executive Committee of The Landmark London Hotel as Director of Conference and Banqueting where he was instrumental in raising the hotel's profile and improving its operations. Following this successful two-year stint, he was promoted to Hotel Manager, overseeing the entire operations of the 300-room luxury hotel. Douglas' next role as Hotel Manager at The Landmark Bangkok in 2012 brings him to Asia, where his strong commercial acumen established a highly profitable outside catering business, achieving a turnover of £6 million within the second year. In December 2013, Douglas was promoted to General Manager.

A St. Julian's Scholar, Douglas was awarded scholarship at the prestigious Cornell University. In 2008, he was awarded an honorary degree from Glion Institute of Higher Education and proudly served as an honorary member of the 16th Chapter of Eta Sigma Delta, awarded by Les Roches Marbella.

Outside of work, Douglas is an avid Manchester United football fan and enjoys food, wine, music, theatre, rugby and golf. Through his genuine passion for the hospitality industry, he also invests time to develop and nurture future leaders of the industry.