The dynamic dozen: The growing hotel markets with big potential

Emerging cities across Asia and the Middle East are fast becoming the new lands of opportunity for investors and developers within the hotel industry. Their hotel markets are experiencing rapid expansion amid surging numbers of tourists and corporate travelers from around the world and strong economic growth.

For now, large-scale investment is still lagging but that could soon all change. "These Emerging Hotspots have some of the largest supply pipelines in the world, and are set to see their total number of rooms increase by 30 percent in the next few years," says Jeremy Kelly, Director of Global Research at JLL.

So where are these dynamic markets? Many are in India where economic boom times are coupled with rising prosperity among its growing middle class to fuel demand for domestic and international brand hotels. The likes of Vietnam and the Philippines also feature along with Middle Eastern markets aspiring to the success of Dubai.

Find out more below about each of the Emerging Hotspot cities.

Its booming tech scene helps to make Bangalore one of the world's most dynamic cities with exceptional economic growth, strong business activity and increasing visibility on the global stage. Business travelers visiting the growing number of IT companies that call the city home all need somewhere to stay, and are driving its hotel sector forward. The city's hotel sector saw an impressive 2016, although the price of rooms remains significantly below those in Mumbai and Delhi.

Hotels in Chengdu, a business hub which acts as a gateway to western China, already benefit from strong corporate demand; two new high-speed rail lines set for completion only bolster the outlook. It currently has the country's largest supply pipeline. New hotel openings include a Crowne Plaza, Intercontintental and Grand Hyatt; W Hotel, Waldorf Astoria and Westin are also forthcoming. Tianfu New Town is one of the areas experiencing the highest level of new hotel development as well as suburban locations such as Qingcheng Mountain and Shuangliu Mountain. However, the large development pipeline - especially for luxury hotels – is impacting on performance and the city is at risk of oversupply.

A number of new internationally-branded hotels have recently opened in this coastal Indian city. Chennai is sometimes referred to as the "Detroit of India" due to the presence of major automotive manufacturers like Ford, which has a 2 million square-foot center planned for the city. Like other growing hubs, Chennai is combining rapid economic growth with high levels of new hotel supply and growing demand.

The capital of the Philippines is becoming ever more popular with international visitors, in part thanks to strong government efforts to boost air connectivity and market the country's touristic appeal abroad. New hotel development is set to be located in the central areas of Makati and Bonifacio Global City, while new casino developments in Bay City and Newport City are also leading to new supply. Demand among business travelers is driven by the city's pre-eminent position as a Business Processing Outsourcing hub in Southeast Asia.

Hyderabad's hotel sector enjoyed unprecedented growth in 2016. This tech-driven city, home to Microsoft's largest research and development campus outside the U.S., has seen plenty of hotel construction lately with new supply concentrated mainly in the HITEC City and Gachibowli regions. But growth in revenue-per-available-room, a key investment metric for hotels, has remained strong despite the large supply pipeline, and the outlook remains bright.

Hotels in Saudi Arabia's capital city have had a boost from recent government investment in museums and archaeological sites like the Al-Faisal Museum for Arab-Islamic Art. Hotel development is expanding into areas such as the King Abdullah Financial District (KAFD) and the Al-Raidah Digital City. Like in Jeddah, Riyadh is expected to double its hotel room supply in the coming years yet the market is still under pressure, with occupancy rates dropping – and a high dependence on government and corporate segments.

India's largest city is home to one of the country's strongest hospitality markets. The next concentration of development will be the MIAL Airport district, while groups hosting conferences and exhibitions will welcome the Dhirubhai Ambani Convention and Exhibition Centre in the Bandra-Kurla Complex. Away from the city center, Navi Mumbai is seeing an infrastructure development boom, with a new airport, port expansion and metro project.

International visitor numbers to the capital of Vietnam, reached 4 million in 2016. The city's popular 'Old Quarter' is still skewed to low-budget backpackers leaving few domestic operators in the luxury end of the market. Still, corporate demand has a key role to play in the city's growing hotel sector with Samsung – a major investor in Vietnam – representing a large chunk of this.

As one the fastest growing major cities in the world, Delhi attracts a large number of business and leisure travelers to create a vibrant hotel sector. Most of new supply coming into the market is focused in the mid-brand to the upper-end to provide more beds for affluent travelers. The Gurgaon and Noida areas, at the center of the city's tech scene, have taken the lead in terms of hotel development, while there is promising demand in the newly-developed Delhi Aerocity hospitality district.

Jeddah is the major gateway city for Muslim pilgrims attending the Hajj in the nearby city of Mekkah. With the major expansion of the Grand mosque and other infrastructure now largely complete, the government authorities are relaxing previous quotas to allow more pilgrims to attend Hajj. This will result in a major increase in hotel night demand in Jeddah over the next few years. The opening of the Ritz-Carlton Jeddah in in the second quarter of 2017 set a new standard for the city, adding 7,700 square metres of meeting space to a market that was previously lacking in quality space, and opening up new possibilities for the city to host events. Other new brands and hotels continue to pop up with the city set to double its hotel room supply in coming years. However, strong supply has its downsides; the performance of the hotel sector has continued to weaken although average daily rates for hotel operators remain strong.

Famed for its colonial architecture, Kolkata has an expanding corporate base and is increasingly playing host to a number of medical conferences and conventions, creating growing demand for business traveler-suitable accommodation. As such, the city saw revenue-per-available-room rates climb in 2016 for the first time in years.

Another fast-developing Vietnamese city, Ho Chi Minh City saw the number of international visitors surge past the 5 million mark in 2016. In future growing demand from China is set to provide a further boost although Japan and Korea also remain key markets. International brands are well-represented here, with an emerging mid-scale and budget scene, which includes a number of prominent local operators.

The Changing Global Landscape of Hospitality 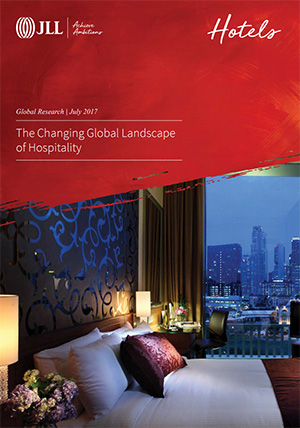 The global hotel industry is being reshaped. Not only is the sector facing changes due to the geopolitical and economic landscape, but it is also seeing structural shifts due to technological disruption, changing leisure patterns and new market players. ​These factors stand to impact the global geography of the hospitality industry, with new and dynamic markets gaining clout vis-à-vis the established destinations.​
Download document (4 MB)

JLL (NYSE: JLL) is a leading professional services firm that specializes in real estate and investment management. JLL shapes the future of real estate for a better world by using the most advanced technology to create rewarding opportunities, amazing spaces and sustainable real estate solutions for our clients, our people and our communities. JLL is a Fortune 500 company with annual revenue of $18.0 billion, operations in over 80 countries and a global workforce of more than 93,000 as of December 31, 2019. JLL is the brand name, and a registered trademark, of Jones Lang LaSalle Incorporated. For further information, visit jll.com.