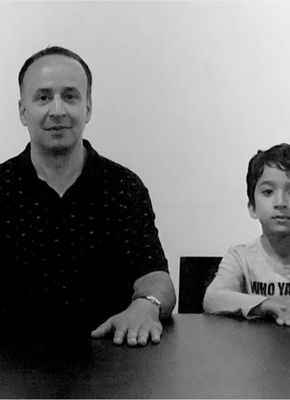 A large number of Marriott employees around the world have answered the call and come forward to run, walk or cycle by way of honouring the memory of Arne Sorenson. Although I am now a former employee of Marriott International, I decided to cycle for 17 miles in memory of my late friend. I chose to ride to his favourite haunt in London - Hyde Park.

Arne was a keen runner. He liked to run in most of the cities he visited. And he loved to run along the Seine in Paris and through Hyde Park in London. I had suggested Regent's Park for his early morning run when he visited London in 2015 but he preferred to stay in Grosvenor House overlooking Hyde Park so that he could run in the park across the road. Arne took part in the Pancreatic Cancer Action Network's PurpleStride run in Washington along with his wife, Ruth, and his daughters, Astri and Esther, after he was himself diagnosed with pancreatic cancer in 2019.

One day I came across a book on running by Murakami entitled What I Talk About When I Talk About Running and thought that Arne might like to read it. He later told me that he had read a few books by Murakami but hadn't heard of this one. Murakami says 'pain is inevitable, suffering is optional'. He confides that 'most of what I know about writing I've learned from distance running'.

What better day to choose for my bike ride to Hyde Park, I thought, than the spring equinox. Arne eagerly anticipated the arrival of spring each year. If I ever saw a purple crocus flowering early on one of my bike rides, I would stop to take a picture and sometimes share it with Arne, together with lines from Thomas Gray's Ode to the Spring: 'Disclose the long-expecting flowers, / And wake the purple year!'

I was able to endure lockdowns in London during this last year because I ventured out for a cycle ride every day. Some of the parks in town were closed during the first lockdown but you could still ride a bike through empty streets. It was a surreal experience. I had seen roads empty in the past only at midnight when I cycled from work to home. I now see a lot of people cycling, either to get to work or for exercise. An American guest at the hotel where I worked told me once that it was a big challenge for his government to encourage his countrymen and women to get out of their cars and walk or run.

When Marriott International launched its TakeCare programme for the wellbeing of its employees a few years ago, Arne was thought of as a role model for the campaign since he lived a very active life. When a manager at our hotel asked the participants in the training programme to guess Arne's age, most of the staff members thought he was under 50 because they had often seen his pictures in running gear. He always ran together with a few employees whenever he stayed in a hotel that belonged to the chain.

Arne also followed other outdoor pursuits. He had climbed Mt Kilimanjaro and taken part in a gruelling long-distance bike ride in Spain with his sons Isaac and Lars in 2018. Arne posted a classic picture on LinkedIn of himself and Isaac flanking Lars, who rode his bike hands-free. Lars told me recently that his father and brother hadn't realised how close he came to falling off his bike when that picture was taken. It would be hard to find another father who would smoke a cigar with his youngest son for fun. On a more personal note, I always found Arne's interest in my literary career to be essentially fatherly.

I pumped up my bike to cycle to Hyde Park and rode via Bishops Avenue, which is full of cars at weekends since many people who come for a walk on Hampstead Heath park their cars there. I was pleased to see a new billboard advertising a reggae concert in the grounds of Kenwood House in June.

I cycled along the Outer Circle of Regent's Park to reach Baker Street and passed the shop selling Beatles memorabilia. It was a ride down memory lane. Arne had been a fan of the Beatles. When I crossed the traffic lights at the junction of Marylebone Road, it reminded me of a young couple from Iowa - also keen Beatles' enthusiasts - who had stayed in our hotel in order to get married at the Old Marylebone Town Hall where Paul McCartney had tied the knot with Linda and where Ringo Starr also held his nuptials.

It was distressing to see a deserted Oxford Street before I reached Park Lane. But I was pleasantly surprised to find a new cycling lane alongside Park Lane. There is a big new hotel built near Hyde Park Corner that will open next year. In fact, there are more than 100 new hotels planned or already under construction in London that could easily have been filled when it was a bustling pre-pandemic metropolis.

A lot of people had descended on Hyde Park to enjoy an afternoon stroll. I met an old friend at the entrance to the park. It was nice to see him after such a long time. The sound of Salsa music lured me towards a bandstand. It was uplifting to see couples dancing after such a long period of isolation. A police helicopter was hovering over Speakers' Corner. My friend informed me that it was because some people had planned a protest near the park. According to legend, you may say anything at the Corner except bad-mouth the Queen.

We walked toward The Serpentine and I saw a few skaters showing their prowess by skating backwards in a synchronised fashion. The cafe at the edge of the lake was open and we were able to grab a drink and sit outside talking about times gone by. On the first day of spring, daffodils were in full bloom looking very colourful under the overcast skies.

I am grateful to have known Arne as a friend and the least I could do was ride to his favourite London park to honour his memory. Since I began writing this appreciation, I have also learned that I am not the only one. Several other ex-employees have undertaken bike rides or runs in his memory. It has to tell you a lot about this remarkable man.