ANN ARBOR, Mich. -- Both full-service and fast food restaurants are revamping their menus and rolling out more mobile ordering options, to the delight of diners. Customer satisfaction with the Accommodation and Food Services sector overall rises 1.8 percent year over year to a score of 79.4 on the American Customer Satisfaction Index's (ACSI®) 100-point scale. According to the ACSI Restaurant Report 2018, full-service restaurants jump 3.8 percent to an ACSI score of 81, while fast food establishments gain 1.3 percent to a score of 80.

"As the economy improves, consumers have more money to spend, and they're dining out more," said David VanAmburg, Managing Director at ACSI. "At the same time, restaurants are adapting their menus and technology in line with shifting consumer preferences, as millennial tastes for fresh food, mobile ordering, and automated kiosks take hold. The bottom line: Restaurants are working hard to please consumers, and the latest ACSI scores show that it's paying off."

Full-service restaurants bounce back from 2017 slump

Texas Roadhouse takes over the lead with a score of 83, up 1 percent over last year. It edges out Cracker Barrel, which falls 4 percent to 81 to tie Darden's LongHorn Steakhouse for second place.

LongHorn's score of 81 represents a leap of 5 percent, which takes the steakhouse from below average to among the top full-service restaurants. The restaurant's reduced menu options and larger steak sizes seem to have paid off in customer satisfaction.

Third place goes to Olive Garden, which dips 1 percent to 80. Outback Steakhouse, Red Lobster, Red Robin, and TGI Fridays all tie at 79, below the industry average. Outback and Red Lobster lose 1 percent and 2 percent respectively, while TGI Fridays jumps 4 percent, a result fueled by a menu overhaul and a return to its roots as a bar.

Red Robin has the biggest gain in the industry, soaring 8 percent to 79. Its focus on menu innovation, online ordering, and call center support helped fuel a 40 percent increase in off-premises sales in the first quarter year over year and resulted in major gains in customer satisfaction.

Applebee's, Chili's and Ruby Tuesday tie at 78, with Denny's just a point behind in last place at 77.

Full-service restaurants make big gains in both food quality (up 4 percent to 87) and food variety (up 4 percent to 86), both of which cater to changing consumer taste preferences for healthier options and customization. Order accuracy remains a strong point for the industry with a score of 89, a 2 percent rise over last year, and restaurant staff are said to be courteous and helpful, with a score of 87, also up 2 percent.

Chick-fil-A holds onto its lead atop all fast food restaurants, with an unchanged score of 87. This is well above the industry average and head and shoulders above the next major competitor, Panera Bread, which falls 1 percent to a score of 81.

Subway and Arby's both fall 1 percent to scores of 80 and 79, respectively.

Papa John's and Pizza Hut are in a dead heat among fast food pizza restaurants, tied at 80. While Papa John's dips 2 percent year over year, Pizza Hut surges 5 percent for the biggest ACSI gain in the industry—likely the result of a new rewards program, and investments in equipment, technology, and marketing.

Domino's is closing in on the top two, rising 1 percent to 79, while Little Caesars, the fourth-largest pizza maker, trails with a score of 77, down 1 percent this year.

Chipotle vs. Taco Bell: No contest

Chipotle Mexican Grill stands steady at 79, leveling off after a 6 percent plunge in 2016. While its financials continue to improve, the fast-casual chain's customer satisfaction hasn't bounced back as quickly from the company's food safety crisis.

Taco Bell sits well below Chipotle at 74, after dropping 3 percent compared to last year. Its score also places it well below its fellow Yum! Brands chains, KFC and Pizza Hut.

Overall, burger chains inhabit the lower end of the fast food industry. This year, Wendy's rises 1 percent to a 77 to overtake Burger King, which falls 1 percent to 76.

Jack in the Box slips 1 percent to 74, while McDonald's remains in last place among burger chains and fast food restaurants overall, with a score of 69 for the third straight year.

In general, customer satisfaction among burger chains has remained largely flat, at a level well below the industry average. As they invest in automated kiosks and mobile fast-pass lanes, it will be interesting to see if there's a resulting rise in customer satisfaction. 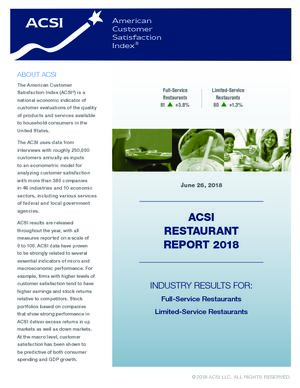 The American Customer Satisfaction Index (ACSI) is a national economic indicator of customer evaluations of the quality of products and services available to household consumers in the United States. The ACSI uses data from interviews with roughly 70,000 customers annually as inputs to an econometric model for analyzing customer satisfaction with more than 300 companies in 43 industries and 10 economic sectors, including various services of federal and local government agencies.

ACSI results are released throughout the year, with all measures reported on a scale of 0 to 100. ACSI data have proven to be strongly related to a number of essential indicators of micro and macroeconomic performance. For example, firms with higher levels of customer satisfaction tend to have higher earnings and stock returns relative to competitors. Stock portfolios based on companies that show strong performance in ACSI deliver excess returns in up markets as well as down markets. At the macro level, customer satisfaction has been shown to be predictive of both consumer spending and GDP growth.

ACSI and its logo are Registered Marks of the University of Michigan, licensed worldwide exclusively to American Customer Satisfaction Index LLC with the right to sublicense.