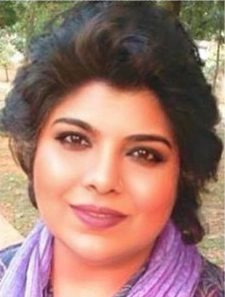 L. Aruna Dhir is a Hospitality & Feature Writer and Columnist for some of the world’s highest ranked Hospitality publications. Her industry writings are syndicated to the finest global hospitality bodies and used as references in case studies and hotel schools.

Aruna is a recognized and national-poll winning Communications Specialist, PR Strategist and Writer.

With over two decades of experience in Hospitality Communications and Brand Management Aruna has worked with some of the best global hotel companies. As their Director of Public Relations and as part of the core group, Aruna was responsible for re-launching The Imperial Hotel as one of the finest hotels in India and Asia. Aruna’s hotel experience includes leading the Marketing Communications and Public Relations portfolio for flagship properties at The Oberoi Group and Hyatt International. She also helped launch the Vilases as the uber luxury experiences from the Oberoi stable.

L. Aruna Dhir is the first–ever Creative Writer for the Indian greeting cards giant – ARCHIES Greetings and Gifts Ltd. The milestone puts her in the league of Helen Steiner Rice and Amanda Bradley.

Aruna serves on the Board of Association of Emerging Leaders Dialogues (AELD), a front-running Commonwealth Body that works towards developing leaders and influencers of tomorrow, with Princess Anne as its international President.

Aruna has been engaged in freelance work for Doordarshan – the Indian National Television, All India Radio and Times FM. Aruna also dabbles in poetry and has to her credit two titles of Anthologies published and marketed by Archies G&G Ltd.

Academically, L. Aruna Dhir topped at the All-India level in her PG Diploma in Public Relations and Advertising. Aruna has been a Ph.D scholar at Jawaharlal Nehru University, akin to an Ivy League in India. She has earned a Senior Management Course Certification from the Oberoi Centre for Learning & Development in partnership with University of Strathclyde, Glasgow; V Dimension Management Company, London & Asian Institute of Management, Manila, Philippines.

L. Aruna Dhir has represented India to a select group of opinion-makers in the United States, as a Cultural Ambassador under the GSE Program of Rotary International. She has also participated in the IXth Commonwealth Study Conference held in Australia and chaired by Princess Anne.

A Freelance Writer since 1987, with articles that have appeared in India’s topmost newspapers and magazines, Aruna is also a blogger, a memoirist with works published on platforms like Medium and a Book reviewer on Goodreads.

Born at Allahabad (now Prayagraj), one of the world’s oldest known cities, L. Aruna Dhir grew up and did her schooling in Dehradun, regarded as a prominent seat of academia and literature.

“The Corona virus Pandemic is far from over,” screams the most recent Deutsche Welle (DW) headline. In a report that follows, and one that is updated every Friday, the publication tells us that while there are 87 countries where there are “fewer new cases”; there are 16 countries in the red zone with “twice as many new cases” and 52 countries with “more new cases.
Opinion30 Nov 2021

About 18 years back I was visiting a very dear friend in Perth, Australia - Joyce P. Westrip. She is an acclaimed author, a Year 2000 Order of Australia Medal (OAM) awardee, a veritable Indophile and an unofficial ambassador for diverse arts and cultures, including being a patron and benefactor of several significant cultural bodies.
Opinion11 Nov 2021

Lessons from the Taj on tackling the present Crisis and beyond!

It is always the hard times that serve the role of a tough teacher, leaving in their wake lessons that become ineffaceable. It is human nature to gloss and glide over the good times and take them for granted.
Opinion 1 Oct 2021

Getting Back On The Road To Recovery With Ted Teng

Viewing our world through the prism of the Pandemic, it strangely yet optimistically, reminds me of the folklore around a tiny ant and a great, ancient King. During one of his unsuccessful raids, the injured King felt hopeless and hapless, fearing defeat and a possibly nearing end.
Opinion28 Jul 2021

Taking Care Of The Key Assets, The Taj Way!

November 26, 2008 is etched as a black letter day in the history of hotels in India. It would not be wrong to say that before that date and largely after it too, most parts of India have been considered safe and essentially terror free.
Opinion22 Jun 2021
Load More
Organization Details
Never miss a story again
Sign up for the HN360 daily newsletter
Media Kit – Submit Content
Advertisement
Advertisements