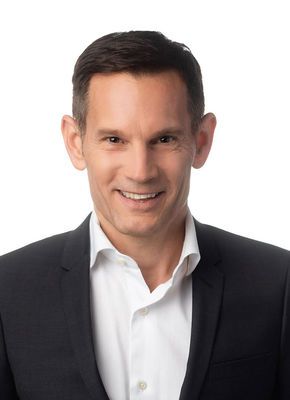 Move over, TripAdvisor — there's a new sheriff in town. Over the past couple of years, Google has revamped its review product, increased review volume exponentially, and made Google ratings more prominent in search, maps and hotel listings.

As a result, Google ratings may have emerged as the most important measure of quality for hotels. Here's why.

Google's role as chief gatekeeper to online travel planning is difficult to dispute, but does it hold a monopoly on search? While company officials bristle at the suggestion, others aren't so convinced. 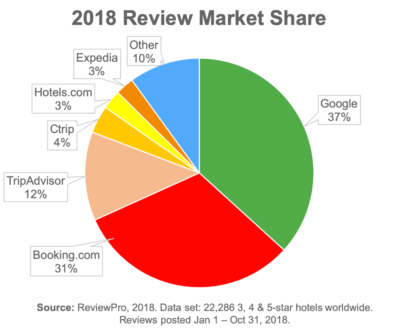 "Google is absolutely, unquestionably a monopoly in web search," says Rand Fishkin, SEO expert and founder of Moz and SparkToro. "They have more than 90% of the market in the United States, and over 95% globally. Only in China, South Korea, and Czech Republic are those numbers lower."

Monopoly or not, Google certainly makes it difficult for competitors. Increasingly, all roads on Google lead to more Google products, even when they're not the best option. In travel, for example, TripAdvisor's review product is superior but takes a back seat to Google reviews.

A day of reckoning may be approaching. The U.S. Justice Department is reportedly gearing up for an antitrust investigation of Google. For the time being, however, we need to find ways to make the most of the current playing field.

As part of its commitment to the user experience, Google rewards high-rated businesses in several ways. First and foremost, in search rankings. Google confirms that "Google review count and score are factored into local search ranking: more reviews and positive ratings will probably improve a business's local ranking."

Moreover, when users search hotels in a destination, a Google Hotels interface featuring a prominent "Guest favorites" button now appears on top of organic results. Click the button and you're taken to a list of hotels rated 4-star and above.

Similarly, searching "best hotels" in a destination, as many users do—mobile searches containing the word "best" have soared in recent years—will take you to the same filtered list. If your property doesn't rate 4-star or higher, you're out of luck.

Google Has Emerged as a Review Powerhouse

Even more striking is the recent surge in review volume. A ReviewPro analysis of over 22,000 hotels worldwide found that Google reviews increased by 309% in 2017 and by an additional 114% in 2018.

In total, Google accounted for 37% of review market share in 2018, more than any of the 166 sources surveyed. Next came Booking.com at 31%. Surprisingly, TripAdvisor's share was only 12%, down 10% over the previous year, and Expedia's was only 3%.

Where are all these reviews coming from? With unrivalled access to user search and location data, Google is uniquely positioned to solicit reviews from users. In addition to asking for reviews in Search and Maps, Google uses location data to prompt users to leave a review after they visit a business.

A newly revamped review process encourages reviewers to provide more than just a star rating. For hotel reviews, users are asked to rate the rooms, service and location, add comments, specify the nature of travel, answer questions about the hotel, and include photos and videos.

If your hotel's review score has spiked recently, you might want to take a closer look before throwing a pizza party. At 80.4%, ReviewPro's 2018 Hotel Brand Reputation Rankings found Google's rating index to be significantly higher than TripAdvisor (77.0%), Expedia (77.3%) and Yelp (61.8%), though slightly lower than Booking.com (81.1%).

So, as the proportion of Google reviews increases, your property's average review score may automatically increase too. 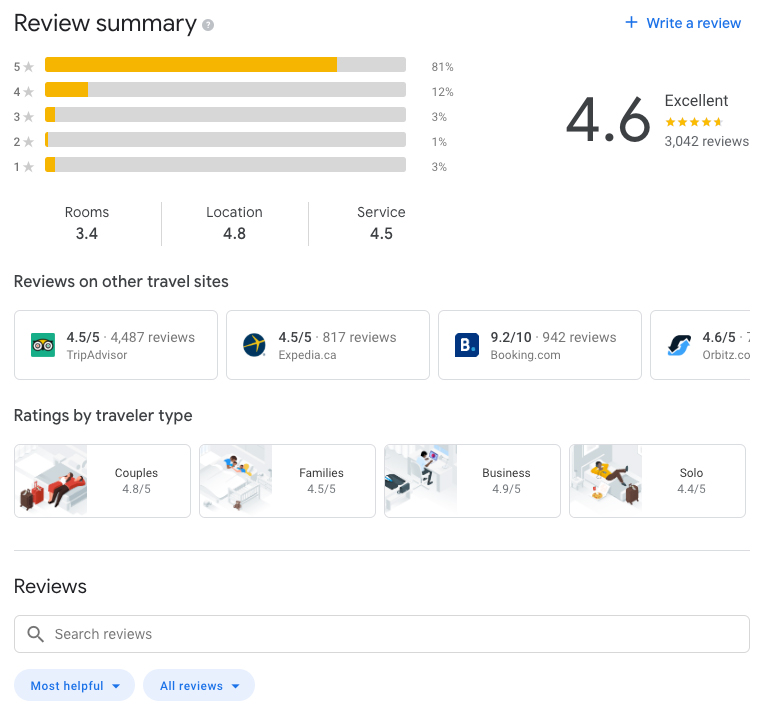 Google Has Vastly Improved its Review Product
Now, when you click the Reviews tab on a Google hotel listing, you discover a treasure chest of review content and metrics. This includes ratings of the hotel's rooms, location and service and—yes, they're back—reviews from other sources, including TripAdvisor, online travel agencies and hotel brands.

You can view ratings by traveler type such as Business, Couples, Families or Solo as well as see sub-ratings in each category for rooms, location and service. You can also sort reviews and search comments by keyword such as meeting, pool or wedding. Best of all, all those anonymous reviews that used to plague Google are gone.

Also new to hotel listings is a Location Score derived from Google Maps data, along with sub-scores for proximity to things to do, transit and airports.

Despite the improvements, Google still has a long way to go if it wishes to rival TripAdvisor's review product. A large proportion of Google reviews are ratings-only, with no comments. By comparison, TripAdvisor reviews have a 200-character minimum, obliging reviewers to put more thought and effort into their comments and providing deeper insights for travelers and hoteliers.

Moreover, a lot of Google reviews are from "Local Guides." With over 60 million participants, Google's Local Guides program rewards points, badges and perks to users for submitting reviews, editing content and answering questions about businesses. While many local guides seem genuinely dedicated to providing helpful information, others seem more interested in reaching the next point level, writing brief, breezy reviews that lack detail.

In the travel industry, where professional tour guides are vetted for the breadth of their knowledge and experience, to haphazardly award so many users with the title of Local Guide seems like a disservice.

Another issue is Google's hands-off approach to reviews. A natural result of providing an open forum for user-generated content is that some of the content will be falsely attributed, inaccurate or fake. While the Communication Decency Act in the U.S. protects companies from liability for user content, a certain degree of mediation is appropriate.

Google makes it clear that it's not interested in policing reviews or acting as an intermediary between reviewers and businesses unless content explicitly violates guidelines. Businesses can flag content, but the lack of responsiveness on Google's part is reminiscent of TripAdvisor in the 2000s.

It's Time to Pay Closer Attention to Google Reviews

While Google's review product is still a work in progress, given recent developments hotels are well advised to lend Google reviews much greater attention than before. This means monitoring reviews closely, flagging false content, tracking the full range of performance metrics, and using feedback to guide improvements.

While there's no direct correlation between responses and positioning on Google, the benefits of prompt, thoughtful responses to reviews are well documented, not the least of which are higher visibility and conversion rates. And don't forget the "Question & answers" feature in the Knowledge Panel. Any Google user can answer these questions, which can result in unhelpful or even inaccurate information. Hotels should set up notifications via Google My Business and strive to be the first responder. 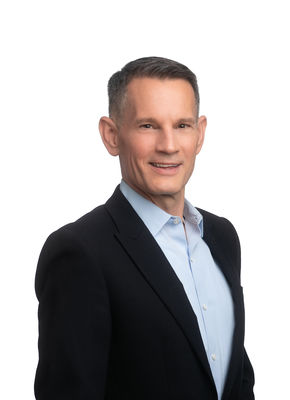