The meeting brings together hotel associations from Barcelona, New York, Paris, Buenos Aires, London, Japan, Western Australia and Mexico City, among others, and representatives of the City Councils of Barcelona, Paris and Dubrovnik and, leaders of neighborhood associations

Barcelona - Barcelona has been for two days the venue of the ReformBnB, an international meeting where the world's leading hotel associations have worked in a common front to fight against the serious issue caused by the illegal tourist accommodation.

Barcelona Hotel Association has been the host of this meeting, in which have participated representatives from more than 30 hotel associations from all over the world, responsible for the City Councils of Barcelona, Paris and Dubrovnik in the field of tourism and spokesmen for the association of neighbors of Barceloneta (Barcelona), one of the neighborhoods that has long been denouncing the serious problems that generate for residents these illegal accommodations.

At the opening ceremony, the president of the Barcelona Hotel Association, Jordi Clos, stated that "We are glad to bring together in Barcelona the hotel associations of the main cities of the world. It is very enriching to be able to share and to debate the experiences that we all experience every day in our respective cities".

Jordi Clos has highlighted that "We are facing a global problem and not a problem of individual cities, and therefore, it is a priority to join efforts to require the administrations to take measures and combat illegal tourist accommodation".

Proposal for a consensus for the administrations

The sessions of the different ReformBnB Barcelona working groups have culminated with the elaboration of a proposal of global guidelines to be assumed by the different administrations over the world.

This consensus document is structured around 7 guidelines: registration, taxation, limitations, safety and health, decision making by neighbors, liability and enforcement and control.

A big challenge for cities around the world

Tourist rental has increased over the past decade due to a poorly regulated environment. In this sense, the almost total absence of rules has led to the rapid growth of rental platforms, being Airbnb, in particular, the most developed platform within this regulatory chaos.

The meteoric growth of online marketing platforms, such as Airbnb, has had a very high social cost for citizens, damaging housing accessibility and, promoting the expulsion of neighbors from the most touristic neighborhoods of the cities and the loss of the essence of these.

During the day, it was announced that Buenos Aires will host the next Reformbnb summit at the end of October 2019. 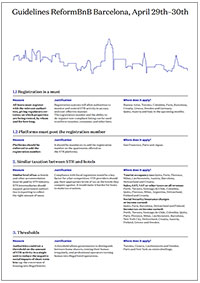