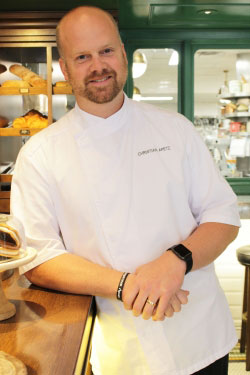 Hyatt Regency San Antonio, located on the famous River Walk and directly connected to Alamo Plaza, announces Christian Apetz as Executive Chef. Apetz joins the property from The Driskill Hotel in Austin, Texas which is part of Hyatt's Unbound Collection.

Apetz always knew he wanted to cook and grew up in the kitchen helping his mother, a native from Finland, make crepes and Finnish Pulla sweetbread. His step mother's family was from Italy so at a young age he also learned how to make Italian specialties such as meatballs, fig salads and fresh-made pastas.

Apetz attended Johnson and Wales University in Providence, R.I. where he received his Associates Degree in Culinary Arts.

Following college, Apetz joined the Corporate Management Trainee program with Hyatt Corporation. He secured his first job with the company in 2000 as Sous Chef at Hyatt Regency Phoenix in Arizona. From there, he was quickly promoted to Banquet Chef and then to Executive Sous Chef working at several Hyatt properties throughout the country including Hyatt Valencia Santa Clarita in California, Hyatt Regency Hill Country Resort and Spa in San Antonio, and Hyatt Regency Boston Harbor in Massachussets.

As Executive Chef, Apetz will oversee all of the hotel's culinary and stewarding operations at its on-site dining outlets including Q Kitchen ǀ Bar and MKT Place as well as the hotel's in-room dining, banquet, and catering offerings. Chef Apetz will also be responsible for menu development for both of the hotel's restaurants as well as meetings and events held at the property.

25 September 2020 — Hāna-Maui Resort, A Destination Hotel, proudly announces the appointment of Jon Benson as general manager of the hotel, which recently joined the Hyatt portfolio. In this new role, Benson is responsible for management, operations and marketing of the resort, suites, bungalows and family residences, as well as assisting with the rebrand of the resort.
read more

28 August 2020 — Billy Sun has been appointed as General Manager of the Grand Hyatt Hefei. Billy has more than 19 years of experience in the hospitality industry. In 2001, Billy commenced his career as a Sales Manager at the Crowne Plaza Guihe Jinan and over the subsequent 13 years rose through the sales, marketing and management ranks at Crowne Plaza Guihe Jinan, Crowne Plaza Hotel Dandong and Sheraton Jinan Hotel.
read more
More from Hyatt
Map
Advertisements
Never miss a story again
Sign up for the HN360 daily newsletter
Media Kit – Submit Content
Advertisement
Advertisements