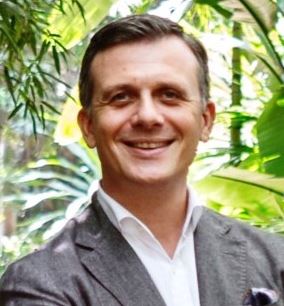 Edouard Grosmangin has been appointed managing director of Rosewood São Paulo, a luxury hotel opening in 2021 in one of Brazil's most vibrant cities. Housed in both a historic building and a new tower designed byPritzker Prize-winning architect Jean Nouvel, the hotel is situated in the heart of the city's Cidade Matarazzo complex. Rosewood São Paulo will be the brand's inaugural property in South America and will bring a new wave of residential luxury to the region. In his role as managing director, Edouard will be responsible for overseeing all aspects of the new hotel, including its six restaurants and bars, as well as South America's first outpost of Asaya, Rosewood Hotels & Resorts' integrative wellness concept.

Originally from France, Edouard is the son of hoteliers, and graduated from Vatel Paris, a leading institute for aspiring hoteliers, in 1996. He joins Rosewood São Paulo as an accomplished and well-respected international hotelier with more than 25 years of experience in the hospitality industry. Most recently, Edouard served as general manager of Raffles Seychelles. During his three-year tenure at the five-star property, Edouard was responsible for the resort's overall performance development and strategic direction. Prior to that role, he served as general manager of Six Senses Zil Pasyon where he prepared for and managed the successful opening of the resort on Felicite Island. Previously, Edouard held the general manager position at Six Senses Con Dao in Vietnam. His career has also included prestigious positions at properties throughout Asia, the Middle East and Europe, with several rooted in food and beverage services, such as director of food & beverage at Hotel de Paris in Monaco. He began his career as food and beverage coordinator at Hôtel de Crillon in Paris, now a Rosewood Hotels & Resorts property since 2017®.

17 May 2021 — Robert Sulatycky has been appointed Executive Chef at Rosewood Sand Hill, the luxury five-star hotel set in Menlo Park, California. In his new role, Sulatycky will oversee all F&B outlets at Rosewood Sand Hill, providing strategic direction to the property's culinary team and its three dining establishments, including Madera, the hotel's famed Michelin-starred restaurant, The Library & Bar and the seasonal Pool Garden Terrace.
read more

30 April 2021 — Rosewood Miramar Beach, Southern California's most luxurious oceanfront resort, is pleased to announce the appointment of Yannick Augy as director of food & beverage. In this role, Yannick is responsible for the overall operation and direction of the resort's food and beverage programs and its distinct dining venues and bars.
read more

8 April 2021 — With nearly 25 years of experience in the luxury restaurant and hospitality industry, Sylvain Delpique has joined The Carlyle, A Rosewood Hotel as executive chef. He will oversee all culinary aspects of the legendary Upper East Side hotel, including the famed Bemelmans Bar and celebrated Café Carlyle.
read more
More from Rosewood Hotel Group
Map
Advertisements
Never miss a story again
Sign up for the HN360 daily newsletter
Media Kit – Submit Content
Advertisement
Advertisements